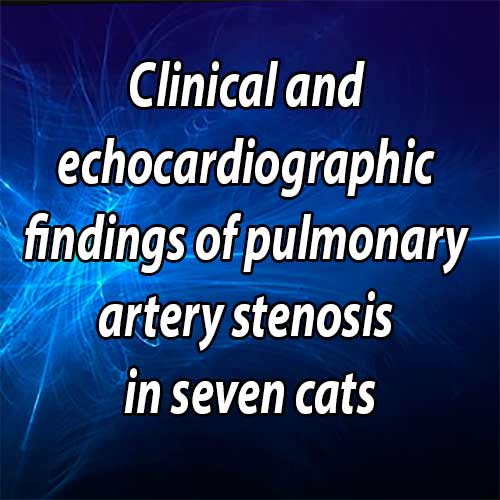 OBJECTIVES: Describe the clinical, electrocardiographic (ECG), radiographic and echocardiographic findings in cats with isolated pulmonaryartery stenosis. Assess the usefulness of systolic and diastolic Doppler measurements at predicting stenosis severity. BACKGROUND: Pulmonary artery stenosis is an infrequent congenital cardiac defect in humans that has not been reported in cats. In humans, pulmonary artery stenosis is usually seen in conjunction with other cardiac defects and may lead to clinical signs if severe. ANIMALS, MATERIALS AND METHODS: Seven cats with pulmonary artery stenosis were retrospectively evaluated. Medical records, radiographs, ECGs, echocardiograms and angiocardiograms were reviewed. Severity of stenosis was assessed by two-dimensional and color Doppler echocardiographic evaluation and clinical findings. Peak systolic and diastolic gradients across the stenosis, and systolic and diastolic pressure decay half-times were graded using echocardiography. In addition, the duration of antegrade flow during diastole was subjectively assessed. Univariate analyses were performed to assess the best variable to predict stenosis severity. RESULTS: Concurrent congenital defects were not identified. Only cats with severe obstruction showed clinical signs including exertional dyspnea and lethargy. Diastolic Doppler measurements were superior to systolic measurements at predicting severity of stenosis. Antegrade flow throughout diastole and/or a diastolic pressure half-time of >100 ms indicated severe obstruction. The prognosis for pulmonary arterystenosis appears to be good regardless of severity. CONCLUSION: Among cats with pulmonary artery stenosis, clinical signs are uncommon and prognosis is good. Doppler assessment of diastolic flow appears to be superior to systolic flow at predicting severity.

Congenital stenosis of the main and/or branched pulmonary arteries has been identified in humans and is commonly identified with concurrent lesions such as ventricular septal defect, pulmonic stenosis, patent ductus arteriosus, or tetralogy of Fallot.1-3 Congenital obstruction of the right ventricular outflow tract is uncommon in cats with an incidence of about 2-3% of congenital cardiac defects.4,5 To the authors’ knowledge, stenosis of the main or branched pulmonary arteries has not been reported in a cat. Stenosis of the pulmonary artery is hemody- namically similar to coarctation of the aorta and was referred to as coarctation of the pulmonary artery in early human studies.1 As with other types of stenotic lesions, Doppler echocardiography has been used to assess the severity of aortic coarctation using the modified Bernoulli’s equation to estimate the systolic pressure gradient across the obstruction, however, this does not consistently reflect severity of the stenosis when compared to gradients measured at cardiac catheterization.6,7 Further studies of aortic coarctation in humans have identified variable degrees of diastolic flow across the stenosis. Both subjective and objective assessment of this diastolic flow has been found to be more accurate than systolic gradients at assessing severity of coarctation in many patients.6,8,9 In humans with pulmonary artery stenosis and in experimental studies of pulmonary artery banding in dogs, there are varying conclusions about how closely the Doppler systolic and cardiac catheterization-derived gradients correlated.10,11 In cats with pulmonary artery stenosis, it was hypothesized that diastolic Doppler evaluation would relate better to severity than systolic evaluation.

Cats with an echocardiographic diagnosis of pulmonary artery stenosis were retrospectively reviewed. The majority of these cats were identified through an animal shelter that receives animals from multiple sites along the east coast of the United States. All of the cats were initially evaluated because a murmur had been ausculted on physical exam. The P-wave and QRS complex amplitude and duration, and the PR interval were measured on three consecutive cardiac cycles and averaged on the electrocardiograms that were available for review. The mean QRS axis was also assessed. The vertebral heart scale (VHS) was measured on all lateral and ventrodorsal radiographs that were available for review.12 Complete echocardiograms were performed using standard echocardiographic views. Maximum pulmonary valve annulus diameter (PVD) and pulmonary artery stenosis diameter (PSD) were obtained from right or left parasternal short-axis two-dimensional (2D) images during systole. Pulmonary artery stenosis diameter was evaluated with the assistance of color-flow Doppler (CFD) to identify the vena contracta in all cases. In cats with severe disease the stenotic orifice was often so small that it was not easily identified without CFD. The ratio of stenosis diameter to pulmonary valve annulus diameter (PSD/PVD) was calculated. Maximum right atrial diameter (RAD) and left atrial diameter (LAD) were obtained from right parasternal long-axis 2D images during diastole. Measurements of the RAD were performed using a method similar to published methods of measuring the LAD in long-axis.13 The ratio of RAD to LAD was calculated and considered normal if <1.0.14 Right ventricular end-diastolic diameter (RVDd) and left ventricular end-diastolic diameter (LVDd) were obtained from M-mode tracings. The RVDd to LVDd ratio was generated and considered normal if <0.33.14 The remainder of the left heart measurements was made from standard 2D and M-mode echocardiographic views. All 2D and M- mode measurements were made on three consecutive cardiac cycles and averaged.

Angiocardiography was performed to better characterize the lesion in the two initial cases. The ratio of minimal stenosis diameter to PV annulus diameter was obtained and averaged from at least two cardiac cycles during systole. 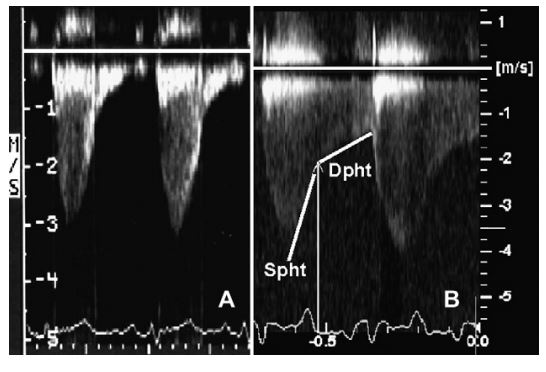 For statistical analysis, severity of stenosis was assessed based on the echocardiographic PSD/PVD ratio. The diastolic and systolic Doppler data were compared to the PSD/PVD ratio. Univariate analyses were performed to assess the correlation with stenosis severity.c A p-value <0.05 was considered significant; r refers to the coefficient of linear correlation between two variables; r-squared for continuous variables refers to the coefficient of multiple determination which estimates the proportion of the response variation that can be explained by the continuous independent variable; and r-squared for an ordinal variable refers to the uncertainty coefficient which, analogous to the coefficient of multiple determination for continuous variables, also explains the proportion of the response variation explained by the ordinal independent variable.

The signalment, clinical signs, and findings of cardiac auscultation are summarized in Table 1. None of the cats had evidence of jugular pulses, cyanosis, alterations in femoral pulse strength or quality, abnormalities in S1 or S2, or a gallop rhythm during a resting examination.

Six of the cats were asymptomatic at the time of presentation. One cat (diagnosed at 12 years of age) was described as less active than expected all of her life by one of two owners. One cat, that had initially been asymptomatic, developed moderate exertional dyspnea soon after diagnosis. An arterial blood gas was performed after dyspnea was induced by exercise. The arterial blood gas was assessed as a mixed metabolic and respiratory acidosis with hypoxia (pH 7.1, pCO2 45.6, pO2 84.0, HCO3 14.0, BE—15, sO2 90%). The calculated alveolar to arterial gradient was nine. The findings were consistent with hypoperfusion from pulmonary artery stenosis. The clinical signs in cat 7 did not progress over time, and no treatment was initiated.

Three cats had an ECG available for review. No abnormalities were identified in two of the cats (#2 and 6). The ECG of cat 5 revealed deep S-waves in leads I, II, III, aVF, a right mean electrical axis shift (170°—180°), and widening of the QRS complex (50 ms) suggestive of right ventricular enlargement or a partial right bundle branch block. Five cats (#3—7) had chest radiographs available for review. All five cats had normal VHS on lateral and ventrodorsal views and one cat (#7) had subjective evidence of right ventricular enlargement and a small pulmonary artery bulge.

Angiocardiography confirmed in cats 4 and 7 an isolated lesion of the distal main pulmonary artery just proximal to the bifurcation without involvement of the branched or peripheral segmental pulmonary artery (Fig. 4). The average ratio of PSD/PVD on the angiocardiograms was 0.50 in cat 4 and 0.32 in cat 7. 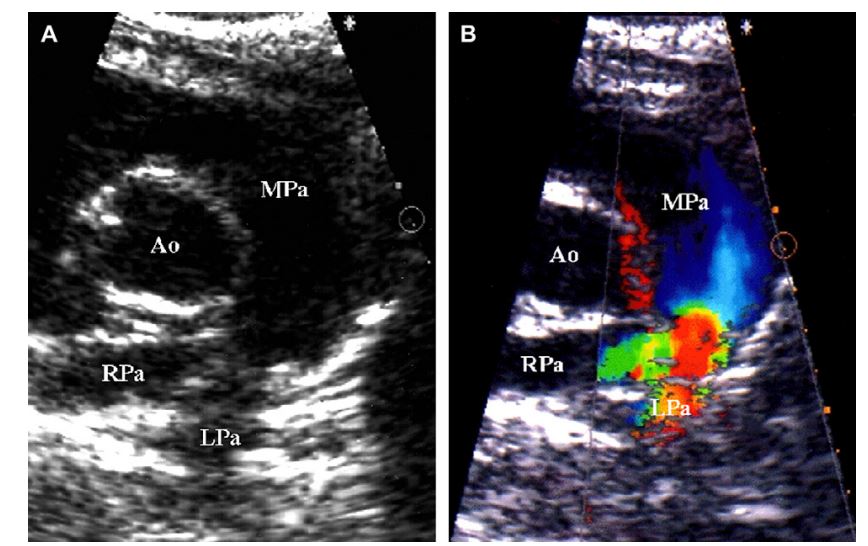 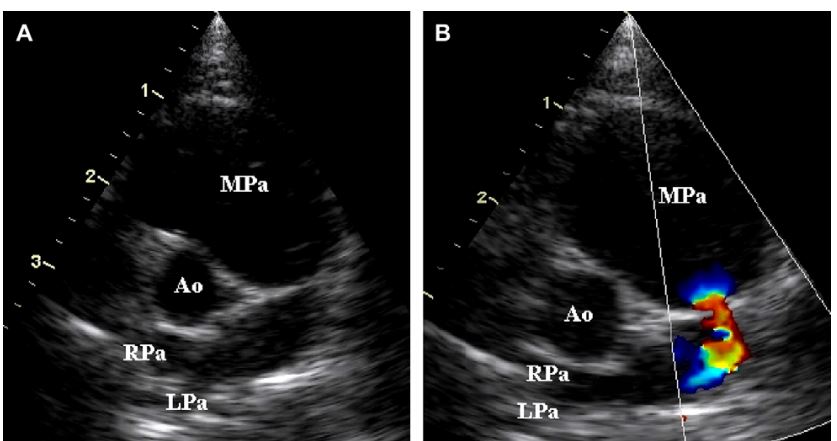 All of the cats were alive well into maturity and only cat 6 had died at the time of publication. Cat 6 had been euthanized approximately 15 months after diagnosis due to repeated signs of anorexia, depression, and sneezing, as well as a suspicious pulmonary nodule on radiographs. A necropsy was not allowed. Cat 4 was lost to follow-up at approximately 8 years of age. At the time of publication, serial echocardiograms have been performed on the remaining five cats. No progression in the degree of stenosis has been identified. 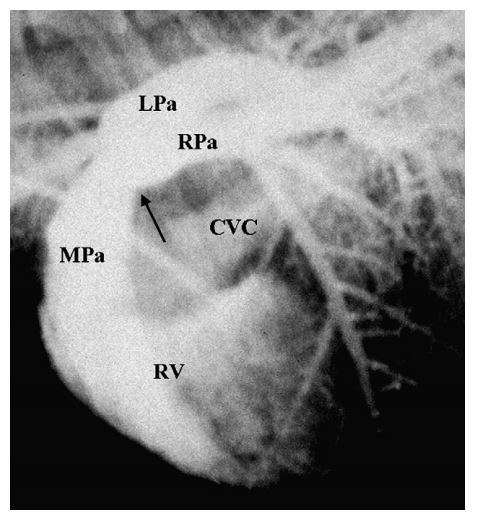 Of the seven cats, six cats were mixed breed, and no sex predilection was suggested (Table 1). The age at the time of diagnosis for most of these cats suggests a congenital lesion although a heritable basis could not be assessed since the majority were stray animals.

All seven cats presented with basilar systolic murmurs although the point of maximal intensity varied (Table 1). Only one cat with severe stenosis and visible Doppler flow throughout diastole had a diastolic murmur. In humans with pulmonary artery stenosis the presence of a diastolic murmur is variable.1,2 Exertional dyspnea was seen in one of the cats with severe stenosis. Exertional dyspnea is one of the most common clinical signs identified in humans with pulmonary artery stenosis, and is likely related to hypoperfusion of the pulmonary arterial tree.3 Based on the blood gas analysis, this was also the likely cause for exertional dyspnea in this cat. It is also possible that certain lesions could result in asymmetric blood flow to branched pulmonary arteries further contributing to ventilation-perfusion mismatch. The available radiographs and ECGs did not reveal specific findings that would differentiate pulmonary artery stenosis from other causes of basilar systolic murmurs. In fact, radiographic or electrocardiographic abnormalities were limited to cats with moderate to severe disease.

Although PaS and PaD were correlated to disease severity, a "natural’’ cut-off between moderate and severe disease was not obvious to the authors (Table 2). Studies in human aortic coarctation support the value of evaluating other diastolic flow parameters.6,8,9 In this study, Dpht and DFA were statistically significant and there appeared to be natural cut-offs between moderate and severe disease using Dpht and DFA. One human paper evaluating patients with aortic coarctation suggested that a Dpht of >100 ms was consistent with severe stenosis.8 Findings in this study suggest that a similar value may be appropriate in cats with pulmonary artery stenosis. Both cats with a Dpht >100 ms and a DFA of 3+ had the most severe stenosis when graded by 2D echocardiography and clinical signs.

The discrepancy between systolic and diastolic Doppler findings and obstruction severity in humans with aortic coarctation is not clear. Causes may be related to changes in cardiac output, collateral blood flow, ductal flow, and the shape and length of the stenosis.6-8 Except for the morphology of the stenosis, none of these would likely be a cause for similar findings in the pulmonary artery. It is possible that, with more severe stenosis, the flexible walls of the main pulmonary artery proximal to the obstruction absorb kinetic energy as the right ventricle contracts against the stenosis. This could result in a lower peak systolic driving force across the stenosis resulting in a lower relative gradient.

The greatest limitations to this study are those inherent to a retrospective study and the small number of cats available. Furthermore, grading of severity was based on 2D echocardiographic findings and clinical signs. Ideally, disease severity would have been graded by angiocardiographic and intra-cardiac pressure data but these invasive diagnostics were believed to not be in the best interest for the majority of these cats.