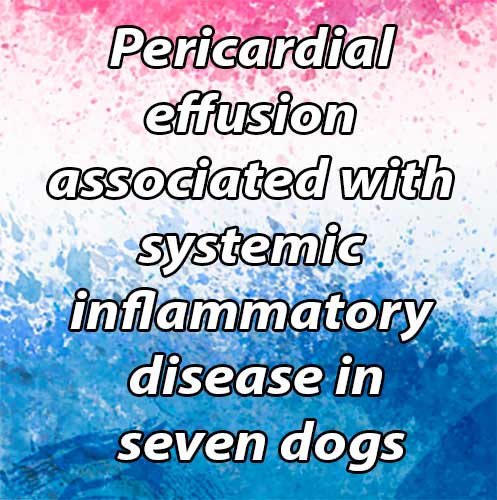 Pericardial effusion (PE) is reported in dogs as a consequence of neoplasia, primary cardiac disease or as an idiopathic condition . We describe seven dogs with systemic inflammatory disease, PE without tamponade and increased cardiac troponin I concentrations. Echocardiographic findings and adjunctive testing did not identify other known causes of PE. Resolution of the PE was documented in five of seven dogs in which follow-up echocardiography was performed, often after anti-inflammatory therapy. Resolution of PE was associated with normalisation of cardiac troponin I levels. Clinical signs had not recurred in six dogs with follow-up for more than 12 months and up to 7 years. These findings suggest an association between systemic inflammation and PE in dogs.

Treatment with prednisolone (3.22 mg/kg PO q 24 h) was instituted on day 2 and repeat echocardiography after four days revealed resolution of the PE, with subjectively similar systolic dysfunc¬tion. Prednisolone therapy was tapered by 25% every 4 weeks, for a complete course duration of 8 months, and telephone follow-up revealed her to be alive and asymptomatic 3 years after presentation.

Treatment with clindamycin (11.7 mg/kg PO q 12 h for 3 weeks) and prednisolone (2.6 mg/kg PO q 24 h) was initiated. Re-examination after 19 days revealed resolution of clinical signs and decreased cTnI (0.5 mg/L). Prednisolone was tapered by 25% every 4 weeks for 6 months. Echocardiography was not repeated but follow-up revealed survival, without clinical signs, 3 years and 5 months after presentation.

Echocardiography after 24 days of first pre¬sentation revealed continued resolution of PE and improved FS (21.1%). Antibiotic therapy was dis¬continued after 5 weeks. Sotalol and diltiazem were continued for recurrent supraventricular tachycardia. Azathioprine (50 mg/m2 PO every second day) was added and prednisolone therapy was slowly tapered. Both therapies were eventually discontinued. Telephone follow-up revealed that the dog was euthanised 11 months after initial presentation due to urinary incontinence.

Echocardiography after 6 days of documented resolution of PE identified a small pedunculated mural mass (7 x 7 mm) in the right atrium suspected to be a thrombus. Repeat cTnI was decreased (2.3 mg/L). Aspirin (0.5 mg/kg/day PO q 24 h) was added. All medications were eventually tapered and discontinued over a 6-month period. Telephone follow-up to the referring veterinarian confirmed continued survival 7 years and 10 months after initial presentation.

Prednisolone therapy was initiated as a tapering course over 4 months starting at 2.1 mg/kg PO q 24 h. Repeat echocardiography performed 6 days later confirmed the resolution of PE. Attempts at follow-up communication were unsuccessful, and so survival could not be ascertained.

Clinical signs completely resolved with intravenous fluid therapy alone. The dog was discharged without medications, for monitoring at home. Repeated cTnI, at the referring veterinarian 19 days later was within the reference interval (0.2 mg/L). Follow-up confirmed continued survival with no clinical signs 1 year and 10 months later.

Pericardial effusion often presents with signs of cardiac tamponade, such as collapse due to acute reduction in cardiac output , or progressive exercise intolerance and respiratory difficulty [3]. Imaging of the thorax and heart is central in obtaining a provisional diagnosis of the underlying cause [4]. Pericardial effusion in dogs has been reported most often associated with cardiac neoplasia, or as idiopathic effusions in large breed dogs, and less often associated with congestive heart failure or bacterial, parasitic or fungal pericarditis [5—9].

This report documents PE without tamponade in dogs with evidence of systemic inflammatory dis¬eases. Similar observations have been reported in humans with several different manifestations of systemic inflammatory disease [10,11]. To our knowledge, this observation has not been pre¬viously reported in dogs. Diagnosis of systemic inflammatory response syndrome is based on the presence of two or more of the following criteria; increased HR, increased RR, increased or decreased body temperature and white blood cell count outside the reference range [12]. Adjusted criteria for dogs have varied, but the purposes of this report were defined as body temperature >39.7 °C or <37.8 °C and white blood cell count >12,000 WBCs/mL or <4000 WBCs/mL (with or without band neutrophils), RR > 40 min~1 and HR > 160 min1 [13]. Six of the seven dogs in this report fulfilled two or more of these criteria for SIRS. Five of those witha SIRS diagnosis, and the remaining case not consistent with SIRS, had an inflammatory disease focus identified during workup.

Known underlying causes of PE in dogs were not identified in the dogs in this report. Pericardial effusion in these was not associated with cardiac tamponade as is often the case with known causes of PE . Finally, the PE resolved without therapeutic pericardiocentesis, typically in response to antiinflammatory therapies, did not recur on longterm follow-up. Therefore, it seems reasonable to conclude that PE in these dogs was the result of systemic inflammation.

Increased cTnI concentration is indicative of damage to cardiac myocytes [14]. In the dogs in this report, secondary non-septic myocarditis through the action of circulating inflammatory mediators was the most likely cause of increased cTnI, though primary myocarditis cannot be ruled out. Increased serum cTnI has been documented in neoplastic (especially cardiac haemangiosarcoma) PE, but not idiopathic PE [15]. The majority of dogs showed evidence of impaired left ventricular systolic function that persisted even after resolution of the effusion, suggesting compromise of myocardial function by systemic inflammatory disease [16]. In one dog where longer-term echocardio- graphic follow-up was available, an improvement in systolic function was demonstrated over the 64- day period. Other dogs in this report may not have had sufficient follow-up to demonstrate this. The improvement in serum troponin levels and long¬term absence of cardiac-related clinical signs without inotropic support are supportive of a transient cardiac injury, but persistent structural myocardial disease was not ruled out in all of these dogs.

The formation of fluid in the pericardial sac, in the absence of abnormal production by infectious or neoplastic disease, is by passive filtration from plasma [17]. Disease states affecting vascular fluid balance; in terms of hydrostatic pressure, endo¬thelial membrane permeability or colloid osmotic pressure, would therefore be anticipated to affect and possibly to increase its formation. Although hypoalbuminemia was a common finding in these dogs, the changes were mild, attributable to acute phase response or third-space fluid shift, and unlikely to have contributed to fluid extravasation by alterations in oncotic pressure. Fluid exudation from affected vessels can be associated with inflammation [18] mediated by inflammatory cytokines resulting in altered vascular function and permeability [19].

The presence of multicavitary effusions in five of the seven dogs is consistent with vasculitis, associated with systemic inflammation, as a cause of the PE. Hyperechoic myo¬cardial changes on echocardiography in one dog could be attributed to myocardial inflammatory change, though other etiologies cannot be entirely ruled out. The pathogenesis of SRMA (the most common diagnosis in these dogs) has been linked to pro-inflammatory cytokine production from T- helper 2 cells [20]. Fibrinoid arteritis is the characteristic histological lesion of SRMA [21], with lesions commonly identified in the meninges, but interestingly also in coronary arteries [22]. Transepicardial fluid flow is one of the principal determinants of fluid balance between the pericardial space and the myocardium. Inflammatory medi¬ated oedema of the myocardium, as seen in some inflammatory diseases, would be expected to increase transudation of fluid and formation of PE [23]. Idiopathic PE could be considered as a possible cause in these dogs, however given their long survival, spontaneous long-term resolution of PE without therapeutic pericardiocentesis would be atypical of idiopathic PE. Furthermore, cTnI was not elevated in previously reported cases of idio¬pathic PE [15] and affected dogs do not generally have evidence of systemic inflammation.

Histological analysis of the pericardium was not performed in dogs in this report, making it difficult to exclude neoplasia, particularly mesothelioma, as a cause of PE. The reported median survival for dogs with pericardial mesothelioma is 13.6 months [24] and so the prolonged survival of most dogs in this case series, with complete resolution of their signs, would be atypical. Infectious disease testing included blood culture (five dogs) and serology or PCR testing (including Bartonella sp. [one dog], Neospora sp. and Toxoplasma sp. [one dog] and arthropod borne disease [three dogs]). All results were negative but not all dogs underwent infectious disease testing, and the difficulty in diagnosis of some pathogens, particularly Bartonella, which has been reported to cause myocarditis and pericarditis with effusion [25,26], make this difficult to entirely exclude. However, five dogs were given immunosuppressive treatment and would have been expected to worsen if infectious disease were present.

In conclusion, this report describes a series of dogs presenting with evidence of systemic inflammation, increased cTnI, left ventricular systolic dysfunction and non-tamponade PE. Pericardial effusion was typically associated with multicavitary effusion, was self-limiting and associated with long-term resolution in response to antiinflammatory therapies. These findings suggest an association between systemic inflammation and PE in dogs. The long-term importance of left ventricular systolic dysfunction in dogs with inflammation-associated PE remains unknown.

Acknowledgements to Pierre Menaut for con¬tribution of cases to the series.