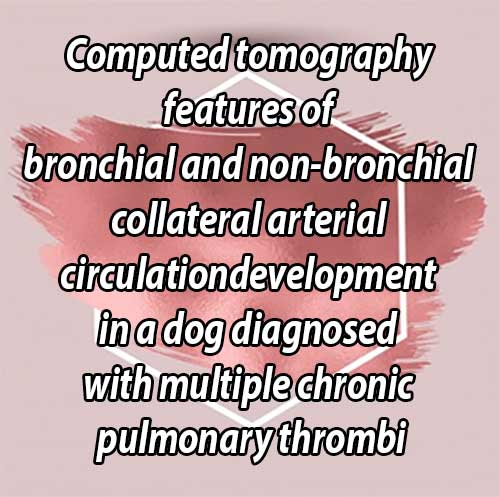 A 5 year-old female Lhasa Apso was diagnosed with a large right pulmonary artery thrombus, multiple smaller pulmonary thrombi, and pulmonary hypertension. In addition, thoracic computed tomography angiography revealed numerous periesophageal arterial vessels, tortuous and dilated bronchial arteries, and an enlarged tortuous left phrenic artery, consistent with systemic bronchial and non-bronchialcollateral arterial circulation development. These features of chronic pulmonary arterial thrombi have not been described in dogs but are recognized in people. One year after the diagnosis, the dog was still alive and there were no clinical signs reported.

A 5 year-old female spayed Lhasa Apso was referred for a 1-week history of cough, lethargy and decreased appetite. A left apical grade I/VI systolic murmur was auscultated. Lung ausculta¬tion was clear. The dog had a positive heartworm antigen test once 3-years prior, was never treated, moderate pulmonary hypertension.1 A hyperechoic intraluminal nodule, 1 cm in diameter, obstructed the right pulmonary artery, with severe pulmonary trunk dilation visible (Fig. 1). A thrombus or a vascular neoplasm was considered likely.

A tortuous vessel was branching from the right of the thoracic aorta, at the 7th intercostal space, coursing toward the heart base along the ventral aorta (Fig. 3A and B), consistent with a dilated bronchoesophageal artery. Multiple tortuous ves¬sels surrounded the thoracic esophagus, branching caudally from the esophageal branch of the left gastric artery, and anastomosing cranially with the dilated cranial thoracic esophagus blood supply (Fig. 3C).

Tortuous thin vessels were observed along the caudal bronchi, representing bronchial arteries (Fig. 4A and B). A tortuous arterial vessel, consistent with an enlarged left phrenic artery, was branching from the left ventral aspect of the abdominal aorta, caudal to the celiac artery. It had a tortuous cranial path, crossing the diaphragm on the left, extending within the caudoventral mediastinal reflection, along the visceral pleura of the caudal lung lobes (Fig. 5A and B). Peripheral linear soft tissue attenuations were observed in the lungs (Fig. 4C), associated with subpleural wedge shaped pulmonary consolidations, con¬sistent with chronic infarctions. 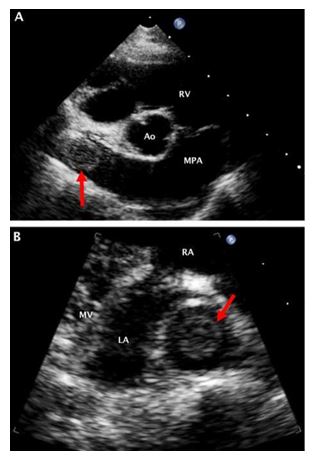 Figure 2 (A) Transverse computed tomographic (CT) images post-contrast in a mediastinal window and (B) precontrast dorsal multiplanar reconstruction (MPR) in a lung window. 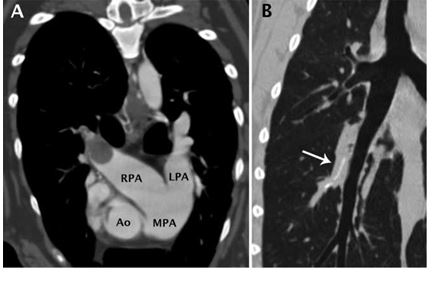 In this report, despite right pulmonary artery obstruction, only small subpleural pulmonary infarctions2 were observed. In people, this lack of severe parenchymal abnormalities has been attributed to the dual pulmonary arterial vascula¬rization.2,3 Two arterial systems supply the lungs: the pulmonary and the bronchial circulations. The pulmonary arteries transport poorly oxygenated blood from the right side of the heart to the lungs at low pressure and represents 99% of the blood flow available for gas exchange.4,5

The bronchial arterial system represents only 1—2% of the cardiac output, and transports oxygenated blood at high pressure.4,5 It delivers blood to the trachea, pul¬monary airways, regional lymph nodes, visceral pleura, esophagus, aortic vasa vasorum, pulmonary arteries and veins.5—7 The primary vessel is the bronchoesophageal artery, arising from the right fifth intercostal artery in most dogs.7,8 It courses along the esophagus, and branches into an esoph¬ageal branch, supplying most of the thoracic esophagus, before entering the pulmonary hilus as the bronchial artery (left and right branches).7,8 The two systems communicate via capillaries, at the level of the respiratory bronchioles, where pulmonary capillaries anastomose with the bron¬chial capillaries.3—6,10,11 These anastomoses are not patent in healthy dogs.9,12

Non-bronchial systemic arteries (NBSAs) also develop with chronic thromboembolic pulmonary hypertension and differ from bronchial arteries by their courses. NBSAs enter the lungs through adherent pleura or via the pulmonary ligament, are not parallel to the bronchi, and provide systemic arterial blood to the lungs via transpleural systemic to pulmonary artery anastomoses.11 In people, they usually originate from the brachio¬cephalic trunk, subclavian arteries, thyrocervical and costocervical trunks, axillary arteries, internal mammary arteries, inferior phrenic arteries, celiac artery and gastric arteries.5 In our case, the esophageal branch of the left gastric artery was observed coursing through the esophageal hiatus (Fig. 2B), supplying the caudal one-third of the thoracic esophagus and anastomosing with the periesophageal ramifications of the dilated bron¬chial circulation.

A dilated left phrenic artery could also be observed within the cranial abdomen and through the diaphragm, within the caudoven- tral mediastinal reflection, along the caudal pul¬monary visceral pleura (Fig. 4)

Physiologically, the bronchial arteries only have a nutritional role, without gas exchange function. Studies have shown that unilateral occlusion of the pulmonary artery stimulates angiogenesis, leading to bronchial circulation hypertrophy.10,13,14 The quantity of blood that can be transported by the bronchial arteries is limited, and they also become tortuous following unilateral pulmonary artery ligation due to an associated increase in their length.13,15,16 In an experimental study in sheep,13 unilateral pulmonary artery ligation led to increased bronchial blood flow approximately 4 days after ligation, with bronchial arterial diameter being about 3 times the control value within 1 week and reaching a maximum diameter in approximately 4 weeks.

However, bronchial circulation is perfused with systemic arterial blood, already saturated in oxygen, and can only have minimal additional oxygen uptake, therefore not playing a significant role in gas exchanges in physiologic conditions.13 Studies in humans and dogs showed that after ligation of one of the pulmonary arteries, the oxygen uptake by the affected lung was insufficient to sustain life for more than a few minutes in the absence of ventilation in the non-affected lung, even several months after ligation.11,14-16 However, the oxygen uptake was increased in the affected lung in patients with hypoxemia or alveolar hypoxia, suggesting participation of the systemic circulation in gas exchange in pathologic conditions, and potentially its important role in cyanotic cardiac diseases.13,16-19