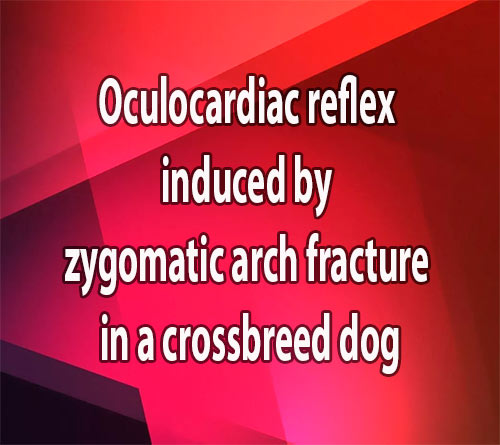 A 3-year-old crossbreed male dog was presented for facial trauma that occurred 7 days earlier. Prior treatment included dexamethasone and gentami- cine without improvement. On initial physical examination, the dog was alert and responsive. Right facial swelling and a small open wound were noted in the affected region. Mild pressure was applied over the swollen area resulting in purulent discharge from the wound. There were no other injuries to the maxilla and mandible, but opening of the mouth was painful. The mucous membranes were pink with a capillary refill time less than 2 s.

Cardiac auscultation revealed a heart rate of 60 bpm. No heart murmur or arrhythmia was detected. Skull radiographs indicated right zygo¬matic arch fracture. The 6-lead electrocardiogram (ECG) confirmed bradycardia with first-degree atrioventricular (AV) block and prolonged uncor¬rected QT interval (0.32 s) (Fig. 1A). It should be noted that this measure of the QT interval includes the late positive deflection of the supposed biphasic T wave. This last waveform in fact may be a U wave, but this is not possible to confirm. Systolic blood pressure measure with the Doppler method was 70 mmHg. There were no obvious abnormalities on thoracic radiographs. Complete blood count revealed mild neutrophilic leucocytosis.

However, note that the final repolarization (positive) deflection may be a U wave. (B) Rhythm strip obtained from the same dog following administration of atropine showing normal sinus rhythm.

In contrast, there is only one published study in dogs in regard to significance of the oculocardiac reflex during ophthalmic surgery.6 Oculocardiac reflex is a trige- mino-vagal reflex which is a frequently occurring complication in humans during ophthalmic surgery.7 Current theory proposes that the sensory nerve endings of the trigeminal nerve send neuronal signals via the Gasserian ganglion to the sensory nucleus of the trigeminal nerve, forming the afferent pathway of the reflex arc. The afferent pathway continues along the short internuncial fibers in the reticular formation to connect with the efferent pathway in the motor nucleus of the vagus nerve. Cardio-inhibitory efferent fibers arising from the motor nucleus of the vagus nerve terminate in the myocardium. These vagal stimuli provoke negative chronotropic and inotropic responses. Consequently, the clinical features of the trigemino- cardiac reflex range from sudden onset of sinus bradycardia, bradycardia progressing to asystole and asystole with no preceding bradycardia.8 Few reports in humans describe oculocardiac reflex in association with zygomatic arch fracture. 9,10

Most cases occurred during reduction of zygomatic frac¬ture.9 There is only one report of electrocardio¬graphic abnormalities following the fracture of zygomatic arch.10 Explanation for this observation was an inadvertent stimulation of parasympathetic fibers in the periosteum of the zygoma.11

In our case, the most notable ECG abnormalities were bradycardia, first-degree atrioventricular block and QT interval prolongation. Typically, bradycardia in dogs is attributed to anesthetic overdose, increased vagal tone, sick sinus syndrome, hypothermia, and administration of vagomimetic or sympatholytic drugs.12 The patho¬physiological mechanism of bradycardia in this case is possibly due to vagal stimulation induced by the oculocardiac reflex. Delay in AV conduction, identified as PR interval prolongation, was also attrib¬uted to vagal stimulation following zygomatic arch fracture. Strong vagal stimulation may block trans¬mission through the AV node.13 Other causes for prolongation of conduction through the AV node include drugs (e.g., digoxin, opioids), and organic disease of AV node.14 The cause of QT prolongation (even with the consideration that the final repolar¬ization wave is a U wave) in this case is likely related to the presence of bradycardia. Acquired QT interval prolongation can be caused by many factors in both humans and other animals: Drugs, serum electrolyte abnormalities (hypocalcemia, hypokalemia, and hypomagnesemia), interventricular conduction delay, hypothermia, central nervous system disease, and bradyarrhythmias.15,16 Para¬sympathetic (vagal) tone has little or no direct effect on ventricular repolarization, exerting only indirect effects secondary to changes in heart rate.17 These electrocardiographic signs were completely resolved after administration of atro¬pine. This supported the hypothesis that the ECG changes were related to stimulation of para¬sympathetic fibers in the periosteum of the zygo¬matic bone.

In conclusion, this case report serves to alert veterinarians to a possible hazard of oculocardiac reflex in dogs with zygomatic arch fracture. In those cases, ECG monitoring is highly advised in order to allow recognition of cardiac arrhythmias secondary to oculocardiac reflex.