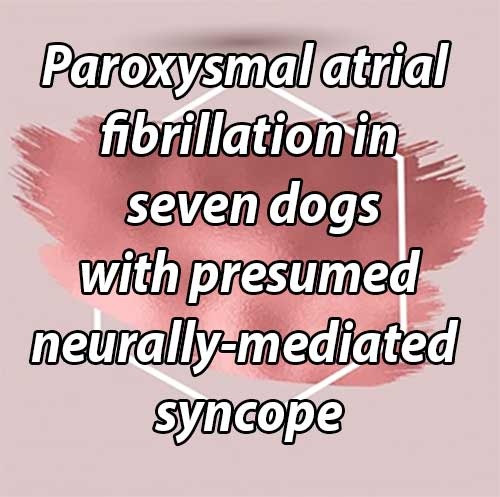 OBJECTIVES: To document the electrocardiographic findings of vagally-induced paroxysmal atrial fibrillation following a presumed reflex syncopal episode in the dog.

ANIMALS: Seven dogs with a syncopal episode followed by a paroxysm of atrial fibrillation recorded on a 24-hour Holter.

METHODS: Twenty-four hour Holter monitors were retrospectively reviewed, analysing the cardiac rhythm associated with syncopal events. Each recording was analysed from 10 min before the syncopal episode to until 10 min after a normal sinus rhythm had returned.

RESULTS: Nine episodes were recorded in seven dogs, with one patient experiencing three events during one Holter recording. Five of the seven dogs presented with underlying structural heart disease. In two the syncopal episodes occurred following exercise, two associated with coughing and three were during a period of rest. All dogs had documented on the Holter recording a rhythm abnormality during syncope. The most common finding leading up to the syncopal event was development of a progressive sinus bradycardia, followed by sinus arrest interrupted by a ventricular escape rhythm and then ventricular arrest. This was then followed by an atrial fibrillation. The atrial fibrillation was paroxysmal in seven recordings and persistent in two. In two dogs, the atrial fibrillation reorganised into self-limiting runs of atypical atrialflutter.

CONCLUSIONS: This combination of electrocardiographic arrhythmias are probably caused by an inappropriate parasympathetic stimulation initiating a reflex or neurally-mediated syncope, with abnormal automaticity of the sinus node and of the subsidiary pacemaker cells and changes in the electrophysiological properties of the atrial muscle, which promoted the paroxysmal atrial fibrillation.

Syncope is defined as a transient loss of con¬sciousness due to global cerebral hypoperfusion and it is characterized by rapid onset, short dura¬tion, with a spontaneous and complete recovery.1 In humans syncope is divided into reflex (vasovagal, situational or carotid sinus syndrome), cardiac (arrhythmias and structural heart disease) and orthostatic (autonomic failure, volume depletion or hypotensive drugs).1 Reflex syncope is an inappropriate and intermittent neural response to a trigger and is classified based on the efferent autonomic nervous pathway involved. The response is the combination of a cardioinhibitory mechanism (predominance of parasympathetic tone) and/or vasodepressor mechanism (loss of sympathetic tone) that results in a fall in systemic blood pressure and cerebral hypoperfusion.1

The vagal cardiac activity during the cardioinhibitory mechanism determines the genesis of different arrhythmogenic patterns.2 The vagal activity inhibits impulse generation in the sinoatrial node generating bradycardia or sinus arrest,3 slows conduction through the atrioventricular node, generating atrioventricular block 4 and alters the electrophysiological properties of atrial and pulmonary veins cells.5 Vagal stimulation shortens the effective refractory period and action potential in the atrial tissue, favouring the formation of reentry circuits, dispersion of repolarisation and the development of atrial fibrillation.6

In a similar way, acetylcholine shortens the action potential duration of the sleeves of the pulmonary veins enhancing calcium transient and Na—Ca exchange current, and when acting in conjunction with high sympathetic tone this facilitates the development of early afterdepolarisation in the pulmonary veins that enable ectopic foci.7 These electro¬physiological alterations create the substrate for the genesis of the vagal atrial paroxysmal atrial fibrillation. Furthermore, the autonomic nervous system can modulate the initiation, maintenance and termination of a functional atrial flutter (Well’s type II), characterised by very rapid rhythm originating under vagal stimulation with no excitable gap in the circuit and cannot be entrained.8,9

Atrial fibrillation and atrial flutter are re-entrant arrhythmias and there is an interrelationship between them .10 The conversion from atrial flutter to atrial fibrillation is due to an acceleration of atrial rate due to the disappearance of areas of slow conduction, decrease in the length of func¬tional block and occurrence of unstable re-entrant circuits of very short cycle lengths with various locations and shape, which disappear and reformed.11 The peculiar combination of neurally- mediated syncope and development of atrial fibrillation has been previously described in human.12

The aim of this study was to determine the arrhythmia and mechanism that led to the development of atrial fibrillation, associated with an episode of syncope and to ascertain if such a rhythm was consistent with a neurally-mediated mechanism for the loss of consciousness.

Case records were retrospectively searched for syncope that had been documented on Holter and associated with a bradyarrhythmia followed by atrial fibrillation. Seven cases were found; these included: three Boxers, one Beagle, one Pug and two mixed breed dogs. Five dogs were male and two female. Age ranged from 5 to 12 years (median: 9.3 years). Body weight ranged from 10 to 40 kg (median: 20.8 kg). Five dogs had under¬lying structural heart disease including degener¬ative mitral valve disease (n = 3), dilated cardiomyopathy (n = 1) and aortic stenosis with 'afterload mismatch’ (n = 1). Four dogs were in well-controlled heart failure, being medicated with furosemide, pimobendan and an angiotensin converting enzyme inhibitor. The Holter recordings were collected from two referral centres, Clinica Veterinaria Malpensa (Cube Holter Cardioline; n = 6) and Veterinary Cardiorespiratory Centre (Lifecard; Spacelabs; n = 1). All dogs experienced one syncopal episode during the Holter monitor¬ing, except one dog that had three syncopal epi¬sodes. Two dogs had syncope associated with exercise, two associated with cough and three at rest. A total of nine electrocardiographic tracings recorded during syncope were analysed.

All Holter recordings were manually edited and analysed by one operator (RAS) starting 10 min before the syncopal episodes reported in the diary until 10 min after sinus rhythm was restored.

Moya et al. 1 proposed a classification of different electrocardiographic findings obtained during syncope. This classification system divided these into four main rhythm disorders observed to explain the possible mechanism of syncope: asys¬tole, bradycardia, no or slight rhythm variation and tachycardia. The characteristic findings of the initial progressive sinus bradycardia, leading to sinus arrest or atrioventricular block followed by ventricular arrest suggest that the syncope is probably neurally-mediated.1,2,4,13 Six electro¬cardiographic tracings in this study showed a pro¬gressive sinus bradycardia with a median heart rate of 60 bpm. All tracings during syncope showed periods of prolonged sinus arrest with ventricular arrest of variable duration. Our findings therefore suggest that the underlining mechanism of the syncopal episodes was a reflex syncope.

Reflex or neurally-mediated syncope is a het¬erogeneous group of conditions in which the car¬diovascular reflexes, that normally maintain homoeostasis, do not respond appropriately to trigger stimuli, such as emotion, orthostatic stress, cough, exercise or mechanical manipulation of the carotid sinuses.1 Neurally-mediated syncope can be classified based on the efferent pathway most involved, i.e. sympathetic or parasympathetic and on its trigger (afferent pathway).1

Fig. 1 A) Electrocardiogram recorded during a syncopal episode in an 8 year old male Boxer. 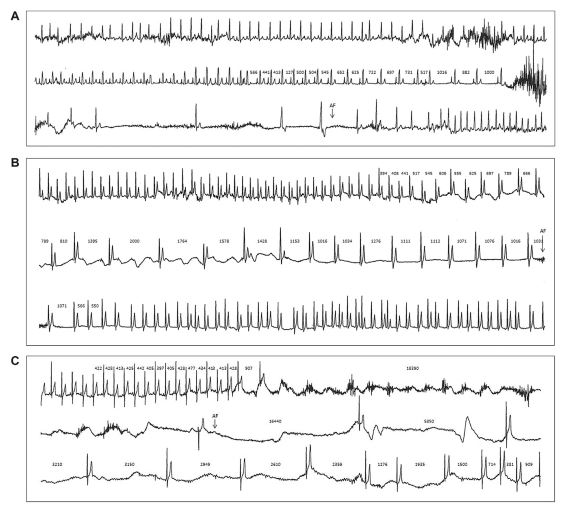 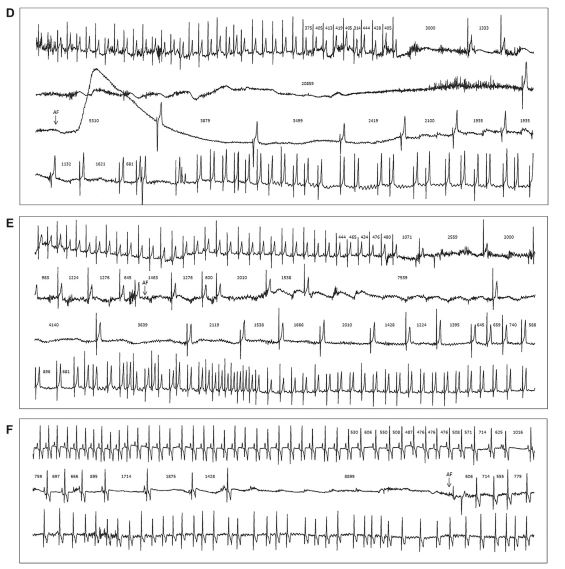 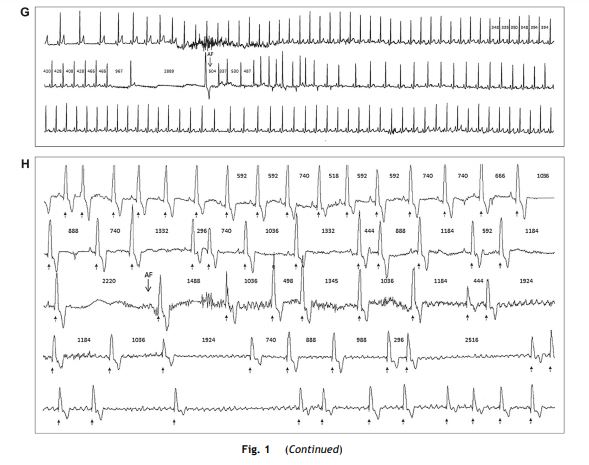 The increased vagal tone generates a cardioinhibitory action that causes bradycardia and asystole, that in combination with sympathetic tone withdrawal producing a loss in vasopressor tone, this results in a profound hypotension. The combination of both factors is responsible for the fall in cardiac output and decreased peripheral resistance, and hence of cerebral hypoperfusion.1 The triggering situations are variable and therefore reflex syncope is classified into vasovagal (emotional or orthostatic stress), situational (vomit, cough, after exercise) and carotid sinus (mechanical manipulation of carotid sinuses).1 In four of the Holter recordings in this study, cardio-inhibition was the dominant component during loss of consciousness, while in five cases the duration of asystole was less than 3 s suggesting that loss of consciousness was probably due by the concomitant presence of a vaso¬depressor component.1,13

In the Holter recordings, the atrial fibrillation was paroxysmal in seven of the nine electrocardiograms and remained incessant in another two. The paroxysmal character of this arrhythmia may be related to the cessation of vagal stim¬ulation after the end of syncope. In the two dogs with incessant atrial fibrillation, the sustained presence of this arrhythmia could be secondary to the existence of a large mass of atrial myocardium associated with concomitant structural heart disease and a raised sympathetic tone that promoted the maintenance of atrial fibrillation.14-17

Fig. 2 Electrocardiogram recorded after a syncopal episode in a 9 year old male Boxer

The tracing reveals an initial paroxysmal atrial fibrillation with an average ventricular rate of 165 bpm with a sudden end and restoration of sinus rhythm. Speed of the recording is 7.50 mm/s. Calibration is 2 mm/mV.

The main limitations of this study include the low number of dogs and the characteristics of the population. The diagnosis of reflex syncope was based on the electrocardiographic findings reported in humans and in experimental models in dogs. The actual mechanism of reflex or neuromediated syncope could not be determined in the absence of tilt-table testing.1 Other causes of cardio- inhibition could not be completely ruled out. Some of the dogs reported here had concurrent cardiac diseases and were being treated with pharmacological medications. In such cases the vagal reflex could have been multifactorial, influenced by drugs and probably different from that documented in dogs with no structural heart disease. Finally, because some cases had a short-term follow-up, recurrence of vagal atrial fibrillation and data regarding the trigger of persistent atrial fibrillation by vagal paroxysm of the arrhythmia could not be analysed.

In conclusion, changes of autonomic nervous balance during presumed reflex syncope can induce paroxysmal atrial fibrillation and atypical Wells type II atrial flutter in the dog. Further studies are needed to define the duration of this arrhythmia and their possible role in the development of persistent or permanent atrial fibrillation in dogs with or without cardiostructural heart diseases.