Septic pericarditis and myocardial abscess in an English Springer spaniel 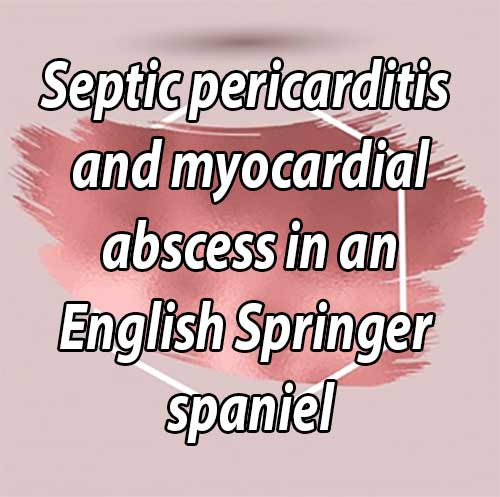 Septic pericarditis and myocardial abscess are rare conditions in dogs. They are usually caused by foreign bodies, penetrating wounds, systemic infections or extension of local infections such as endocarditis, pleuritis or pulmonary infections to the myocardial tissue. Here we report a septic pericardial effusion and myocardial abscess in a young English Springer spaniel presenting with a long history of pyrexia and lethargy. No cause could clearly be identified although a penetrating injury or dissolving foreign body was highly suspected. The patient was successfully treated with a surgical approach in combination with broad spectrum antibacterials resulting in resolution of clinical signs without recurrence of the infection.

A 14.1 kg, 3-year-old neutered female English Springer spaniel presented as an emergency to the Small Animal Teaching Hospital of the University of Liverpool with a three-month history of intermittent pyrexia and lethargy. The patient had been intermittently inappetent and tachypnoeic and had recently begun to vomit.

A dramatic clinical response to antibacterial therapy with clavulanate—amoxicillin had been seen, but signs recurred once treatment was withdrawn. Thoracic radiographs taken one month prior to presentation were unremarkable. However, on the day before referral a pericardial effusion was detected and 60 ml of turbid sanguineous fluid was drained by pericardiocentesis. The fluid was sent for cytology and culture.

On presentation the dog was relatively bright and had a body condition score of 4/9. Clinical examination revealed tachypnoea (respiratory rate 60 breaths per minute) without apparent dyspnoea, a grade III/VI pansystolic heart murmur with maximum intensity over the right side and pyrexia (39.4 °C). No adventitious lung sounds were audible. Heart rate was 78 bpm with a reg¬ular rhythm and good femoral pulse quality. The remainder of the physical examination was unre¬markable. The Doppler estimated systolic blood pressure was 110 mmHg.

Transthoracic echocardiographyd was performed which revealed right atrial and ventricular dilation with severe tricuspid regurgitation and subjectively short chordae tendinae anchoring the anterior leaflet of the tricuspid valve to the pap¬illary muscle (Videos 1 and 2) consistent with tricuspid dysplasia. A cavitated mass lesion (1.5 x 1.7 cm) was visible within the apical area of the right ventricular free wall, consisting of a thick hyperechoic capsule with a small central hypoechoic area (0.4 x 0.6 cm) and a hyperechoic linear structure (Fig. 1(A) and (B); Videos 3—5). A mild residual pericardial effusion remained localised over the area of the cavitated lesion (Video 5).

The transtricuspid flow showed a normal relaxation pattern (tricuspid valve E/A ratio of 1.23) although impaired diastolic function was suspected from the pulse wave longitudinal TDI of the right ventricular (RV) free wall (RV E'/A' ratio 0.68, healthy dogs RV E' > A').1 There was no evidence of pulmonary hypertension (peak velocity of the tricuspid regurgitation 2.45 m/s) and all other two-dimensional and Doppler variables showed no sig¬nificant abnormalities.

Thoracic computed tomography performed under general anaesthesia confirmed the presence of a large 1 x 2 cm globoid thick walled cavitary lesion arising from the myo¬cardium in the cardiac apex. The center of the lesion was homogenous in appearance, slightly hyperattenuating to water (11 HU).

Figure 1 Echocardiographic right parasternal long axis four chamber (A) and short axis (B) views at the level of the apex optimized to see the cavitated mass lesion (arrows) in the apical area of the right ventricular free wall. 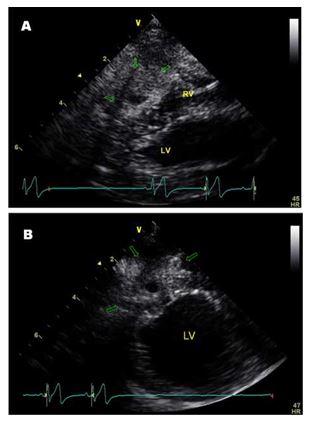 The post contrast images showed irregular rim enhancement of the lesion with no enhancement of the centre (Fig. 2), thickening of the pericardium with trivial effusion localized only at the level of the apex with no effusion adjacent to the majority (>95%) of the heart, and a markedly dilated right ventricle and atrium. The remainder of the thorax was unremarkable. No foreign body was visible, however, because of the presence of the hyperechoic linear structure noted within the myocardial cavitated lesion on echocardiography, a migrating foreign body could not be completely excluded. 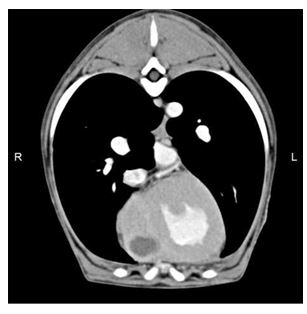 There is a large cavitated fluid filled lesion in the myocardium of the right ventricular wall close to the cardiac apex. R = right, L = left.

Based on the analysis of the pericardial fluid, echocardiographic and imaging findings, suppu¬rative septic pericarditis and a myocardial abscess were suspected and therapy was instituted with intravenous combination of antibacterials (clav- ulanate—amoxicillin 20 mg/kg q 8 h, marbofloxacin 2 mg/kg q 24 h and metronidazole 10 mg/kg q 12 h).

Exploratory median sternotomy was performed four days after presentation to drain the abscess and to look for the suspected foreign body. Examination of the heart revealed an approximately 2 x 3 cm abnormal region of swollen, pale tissue on the apex of the heart on the right ventricular wall which was adherent to the pericar¬dium. Aspiration of the lesion with an 18 g needle revealed purulent fluid.

The abscess was incised and drained. Fluid was submitted for bacterial culture that was negative, however, the direct Gram stain of the aspirate demonstrated clusters of Gram positive coccoid/rods along with occa¬sional Gram negative short rods. Some bacteria were intracellular within neutrophils.

Figure 3 Histological images of epicardium (A) and endocardium (B). 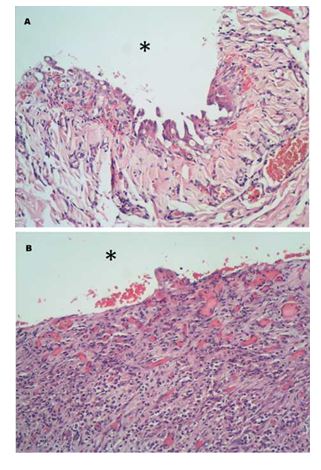 No definite foreign material was seen, although a dissolving foreign body could not be ruled out. The abscess was lavaged and left opened to heal by second intention and a sub-total pericardiectomy was performed to allow drainage.

Histopathological analysis of the excised pericardium and adherent myocardium revealed extensive chronic inflammation of both tissues and granulation tissue formation within the myocardium (Fig. 3(A) and (B)) consistent with a response to a migrating foreign body or penetrating injury and secondary bacterial infection. This diagnosis was also supported by the presence of aggregates of bone and cartilage surrounded by neutrophilic infiltrates on the serosal surface of the sample submitted.

The patient had no clinically relevant arrhyth¬mias during or immediately after surgery. However, 72 h postoperatively the dog became lethargic and an electrocardiogram showed periods of sustained ventricular tachycardia at 250—280 bpm so antiarrhythmic medication was started. Initially, this was with sotalol titrated up over the subsequent 48 h to 1.5 mg/kg PO q 12 h but the arrhythmia was not well controlled so mexiletine (7.7 mg/kg PO q 8 h) was added.

A brief echocardiogram performed at this point showed a marked reduction of the right heart dilation so the dose of furosemide was gradually reduced to 0.7 mg/kg PO q 12 h. The rest of the medication remained unchanged. The patient was discharged 6 days post-surgery on oral antibacterials, heart failure medication and antiarrhythmic therapy as previously described.

Clinical examination one month postoperatively was unremarkable and the previously noticed heart murmur was no longer audible. Routine haematol¬ogy was unremarkable and cTnI was only mildly elevated at 0.19 ng/ml (reference range 0.01 —0.15 ng/ml). Echocardiography showed that the apical area of the interventricular septum was thickened and hyperechoic, suspected to represent fibrosis of the lesion. There was no evidence of the cavitated mass. Moderate tricuspid regurgitation persisted with a peak velocity of 2.48 m/s.

The right atrium and ventricle were dilated but subjectively smaller than in the previous exam. Longitudinal TDI of the interventricular septum (IVS) and right ventricular free wall suggested impaired relaxation (IVS E'/A' ratio 0.81 and RV E'/A' ratio 0.70; healthy dogs RV E' > A').1 The systolic function remained slightly depressed although it had not deteriorated (FS 19%; EF 46.8%; ESVI 42.1 ml/m2). A 24-h ambulatory electrocardiogram showed no ectopic complexes so mexiletine was stopped.

Marbofloxacin and furo- semide were also stopped based on the test results and resolution of clinical signs. The rest of the medications remained. Two months after surgery, the patient remained asymptomatic; routine haematology was unremarkable and a 3-min electrocardiogram showed no evidence of ectopy so the metronidazole and sotalol were stopped. Three months postoperatively, the patient remained asymptomatic with an unremarkable haemogram so the clavulanate—amoxicillin was stopped. Repeat examination four months after surgery showed no recurrence of the myocardial abscess, no signs of ventricular ectopy and a normal cTnI of 0.1 ng/ml.

However, echocardiography revealed that moderate to severe tricuspid regurgitation remained, with right atrial and ventricular dilation although the right heart looked subjectively smaller than on the initial echocardiography. Systolic function had improved compared with theinitialechocardiogram with a FS of 22%, EF of 59% and ESVI of 34 ml/m2.

Based on these findings, the pimobendan and spi¬ronolactone were stopped although benazepril was continued. The final examination was performed nine months after presentation with the patient remaining free of clinical signs and no further echocardiographic changes with a similar degree of tricuspid regurgitation and right-sided chamber dilation. Mild systolic dysfunction persisted (FS of 16%, EF of 46.9% and ESVI of 45.5 ml/m2) and inspection of the right ventricular apical area showed normal echogenicity with no signs of recurrence of the abscess.

Suppurative pericarditis and myocardial abscess are rare conditions in dogs.2-6 When present they are most commonly caused by a foreign body, penetrating wounds, systemic infections or extension from local infections like endocarditis, pleural or pulmonary disease.5-16 In this patient no clear cause was identified although, due to the long history of pyrexia and histopathology findings, a penetrating injury or dissolving foreign body could not be ruled out.

In the past, confirmation of these lesions was frequently performed post-mortem but improvement of imaging techniques has facilitated a prompt diagnosis. Echocardiography was an essential tool to visualise the lesion although in order to accurately evaluate the anatomical location and extension of the mass, computed tomography of the thorax proved useful. Impor¬tantly, it also showed that the mass was located in a surgically approachable area. Other imaging techniques such as three-dimensional echo¬cardiography or cardiac MRI may have allowed further characterisation of the spatial orientation and extent of the lesion and even volumetric quantification of the abscess,17 however, they were not available.

Mixed bacterial growth was reported to be common in a case series of septic pericarditis8 and such growth may support the hypothesis of an infection caused by a foreign body or penetrating wound reflecting the opportunistic nature of the infection.10 In this patient, the presence of a heavy growth of mixed anaerobic bacteria was confirmed on the initial culture of the pericardial fluid, however, the culture followed one day of clavulanate-amoxicillin treatment, which may have affected the results. Even though aerobic culture was negative and no sensitivity results were available for the anaerobes cultured, triple antibacterial therapy was continued.

The impaired systolic function in this dog may have been due to myocardial depression caused by the abscess or inflammatory cytokines, which are known to be myocardial depressants.18,19 However, it may also represent an "athletic heart”. Trained athletes commonly show a mild degree of systolic dysfunction which is considered physiologic,20 and has been previously reported in a family of fit English Springer spaniels.eThe fact that the systolic function improved after resolution of the septic pericarditis and myocardial abscess suggests that these lesions were affecting the cardiac function.

The discontinuation of the positive inotrope pimobendan may partly explain the decline of the systolic func¬tion noticed between the last two examinations. However, different operators, repeatability and day-to-day variation may partly be responsible for the changes seen in the systolic function especially in regard to volumetric measurements.

Previous reports have suggested a poor prog¬nosis for patients with septic pericarditis and/or myocardial abscess, 3,9-11,14,16 although a case series of five dogs with infectious pericarditis that were treated with pericardiectomy and broad spectrum antibacterials had a positive outcome.8 The dog of this report was managed with surgical and antibacterial treatment leading to a full recovery.

This is in agreement with the previous reports suggesting that aggressive treatment with a combination of surgery and antibacterials may improve the survival of dogs with pericardial and myocardial infections.8,15

Left parasternal four chamber view optimised for the tricuspid valvular apparatus and right ventricle with and without colour Doppler at the level of the tricuspid valve. Note multiple tricuspid regurgitant jets causing severe tricuspid insufficiency, and the short chordae tendinae anchoring the anterior leaflet directly to the papillary muscle.

Right parasternal short axis image optimized to view the myocardial abscess. Note the linear hyperechoic structure within the mass and the residual pericardial effusion localised over the area of the lesion.