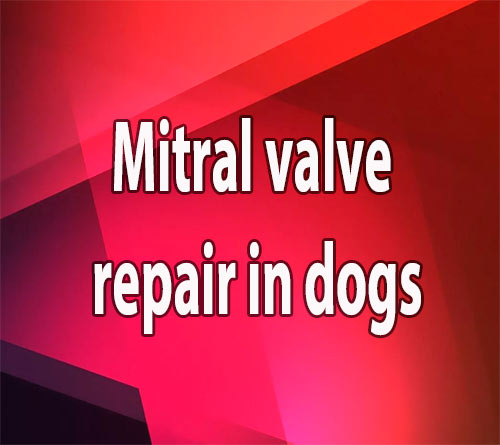 Dogs with severe mitral regurgitation have a poor prognosis despite recent medical advances for the management of heart failure.1 While pimobendan improves the clinical condition and prognosis in affected dogs, 80% of these patients are likely to worsen or die within 2 years of diagnosis.2 Because medical management of secondary heart failure is incapable of correcting disorders of the mitral valve complex, surgical intervention is required to improve clinical condition and prognosis. Surgical treatments for mitral regurgitation include valve replacement and valve repair. While these are standard therapies in humans,3-6 mitral valve surgery has been reported in comparatively few veterinary patients.7-18 Open heart surgery is more commonly attempted in larger breeds, as it is difficult to perform cardiopulmonary bypass (CPB) in small dogs using traditional methods.14 Recent improvements in CPB techniques have facilitated its effective use in small-breed dogs18-20 and even in a cat.21 These advances have enabled successful mitral valve surgery in a wider range of dog sizes.

In both human4,5 and veterinary medi- cine,13,14,18 properly performed mitral valve repair, including both circumferential mitral annuloplasty and artificial chordal replacement, confers excellent durability and improved longterm clinical outcomes without the need for long-term antithrombotic therapy. Thus, mitral valve repair may become an important treatment for mitral regurgitation in dogs. This report describes methods for mitral valve repair in dogs . Cardiopulmonary bypass Mitral valve surgery requires stopping the heart and support of cardiac and pulmonary function by CPB. This is accomplished by a heart-lung machine with an extracorporeal circuit, oxygenator, and heat exchanger.

The CPB circuit is filled with a priming solution consisting of 20% D- mannitol, 7% sodium bicarbonate, and heparin sodium in acetate Ringer’s solution. In dogs weighing <4 kg, priming solution should be replaced with 20-50 mL of whole blood in order to avoid excess hemodilution. Induction of hypo¬thermia during CPB reduces demand for O2 and preserves peripheral tissues. This is achieved by combination of body-surface cooling and use of a heat exchanger within the CPB circuit. Use of both techniques simultaneously maximizes control of the body temperature. When used in conjunction with anesthesia, hypothermia limits damage during CPB by maintaining low blood circulation.18,24

In preparation for CPB, the left carotid artery and the jugular vein are surgically isolated and the thoracic cavity is opened at the left 4th or 5th intercostal space. Heparin (400 U/kg) is adminis¬tered intravenously. Once the activated clotting time has exceeded 300 s, an arterial cannula is inserted into the carotid artery.25 In dogs weigh¬ing <5 kg, arterial cannulation to the carotid artery requires a 6-Fr cannula, whereas an 8-Fr cannula is needed for dogs weighing 5-10 kg. A single venous cannula is inserted into the left jugular vein. An 8 to 10-Fr cannula in dogs weighing <5 kg or a 10 to 14-Fr cannula in dogs weighing 5-10 kg is appropriate. Cannulation of peripheral vessels is preferred over direct can- nulation of aorta and right atrium in small dogs in order to avoid obstructing visualization of the surgical field by the cannulae. The CPB circuit is connected to both the arterial and venous cannulae.

Air is carefully removed from the arterial side of the circuit. The artery and vein lines are de-clamped and CPB is commenced at a flow rate of 90-120 mL/kg/min. The body temperature is held between 25 and 30 °C. The pump flow is carefully monitored to match venous return (Fig. 1). During CPB, anesthesia is switched from inhalation of isoflurane to intravenous fen- tanyl and propofol infusion. During CPB, arterial and central venous blood pressure, oxygen saturation and blood gases are monitored.

Mitral valve repair requires a bloodless and motionless field of vision. This is achieved by infusing a cardioplegia solution into the coronary arteries via the aortic root. A catheter is inserted through a purse-string suture on the left lateral side of the ascending aorta. The aorta is occluded using a vascular clamp placed distal to the cardioplegia cannula and proximal to the brachioce¬phalic artery. Cardioplegic solution is immediately infused into root of the aorta to induce cardiac arrest (Video 1). Administration of cardioplegia solution is repeated every 20 min. Although this is the standard protocol for intracardiac procedures, it is also possible to utilize an on-beat cardiac surgery technique,17,21 which diminishes the risk of ischemia-reperfusion injury.26 However, this may cause blood to leak from the aorta obscuring the surgical field.

Figure 1 Cardiopulmonary bypass. An arterial cannula is placed in a carotid artery and a venous cannula is inserted into the jugular vein. Both cannulae were connected to the CPB circuit. Venous blood was withdrawn from the jugular cannula and sent from the blood reservoir to the artificial lung by the CPB pump; the blood was then returned to the carotid artery. Shed blood is returned to the blood reservoir via suction lines. 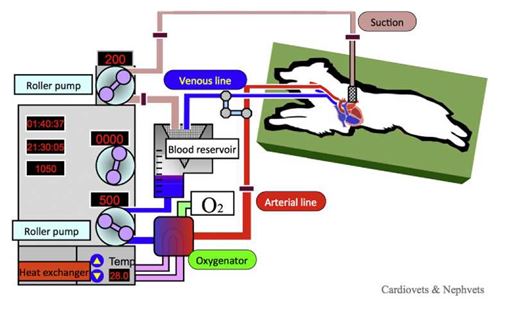 The patient is re-warmed to >36 °C prior to weaning from CPB. After the left atrium has been closed, the aortic clamp is removed. As coronary circulation restored, cardiac rhythm may return spontaneously (Video 3). Use of a defibrillator at 10—30 J may be required if ventricular fibrillation is observed. The flow rate is decreased in a stepwise fashion until CPB is terminated. Once the cannulae have been removed, it is generally necessary to administer protamine (1.0—1.5 mg of protamine per 100 units of heparin) to reverse the effects of heparin. Prot¬amine activates the complement cascade through the classic pathway and occasionally provokes temporary severe bronchospasm, elevation of pulmonary vascular resistance, and hypotension. These reactions can cause severe hypotension and hypoventilation. These adverse reactions are reduced by slow stepwise administration of prot¬amine (0.1—3.2 mg/kg per 5—20 min).

Our team employs a left atriotomy approach to perform mitral valve repair . This enables visuali¬zation of ruptured mitral chordae tendineae through the opened left atrium (Video 2). Several methods of mitral repair have been reported in humans.3—6,27—29 The Carpentier technique, which uses leaflet resection and rigid or semi-rigid annuloplasty rings, has been widelyused in humans.27 However, this technique substantially disrupts important functions of the mitral valve complex, and as a result, most centers have found it difficult to repair more than 50—60% of insufficient valves.28,29 An alternative is the technique reported by Lawrie,28 who used artificial chords and a flexible annuloplasty ring sutured in place with a running technique without leaflet resection. This method can be correlated with the normally functioning mitral valve in the beating heart. Resection of the mitral leaflet would be a particularly difficult procedure in small-breed dogs because of their small size. These results suggest that mitral valve repair in dogs is best achieved with artificial chordal replacement and mitral annuloplasty without mitral resection.

Mitral annuloplasty plays an important role in maintaining long-term durability after mitral valve repair.39 The saddle-shaped mitral annulus is higher at the cranial and caudal segments and lower at the commissures.40-42 The mitral area is reduced from mid-diastole to late systole, such that the mitral annulus exhibits translational motion during systole.40,43 This sphincter mechanism increases the depth of leaflet coaptation during systole, and increases the annular orifice area during dia- stole.40-42 These physiological motions of the annulus should be maintained during mitral annu- loplasty. Annular stabilization with prosthetic materials enhances durability by increasing leaflet coaptation and preventing future annular dilatation.39

Figure 2 Placement of artificial chordae. The septal mitral leaflet is shown with ruptured caudal chordae tendineae and papillary muscles (A). The double-armed ePTFE suture is passed through the mitral valve, into the caudomedial papillary muscle, and then back through the mitral leaflet (B). Another suture was made on the other side in the same manner and both were tied. This procedure was repeated on the mural leaflet.

Saddle-shaped annuloplasty rings provide superior uniform annular force distribution compared to flat rings, and appear to minimize out- of-plane forces that could be transmitted to leaflets and chords.44 Prosthetic rings designed for humans are not of a suitable size for small-breed dogs. Use of a mitral plication suture instead of an annulo¬plasty ring may preserve the natural shape and hemodynamic performance of the annulus.45,46 However this method is not as durable as ring annuloplasty due to detachment of the suture from the annulus.47-50 By contrast, prosthetic soft ring annuloplasty provides reproducible and long-term results in dogs. The best alternative for small dogs is a soft prosthetic ring made of ePTFE material that can be trimmed to an appropriate size at surgery. The size of the mitral annulus can be determined by a sizer that matches the mitral annulus and the root of the aorta.

We frequently observe annular dilatation at the cranial and caudal mitral commissures. This prevents us from achieving proper coaptation, thereby leading to nontrivial mitral regurgitation. This may be rectified by use of a plication stitch between the mural and septal leaflets at the commissures.51 Our preferred approach for mitral annuloplasty is placement of plication sutures with pledgets at the cranial and caudal commissures of the mitral annulus to reduce the size of both commissure regions. Then 5-0 sutures are pre¬placed in the mitral annulus and passed through a strip of ePTFE material approximately 1.5 mm wide and 40-55 mm in length (Fig. 3, Video 3). The sutures are then tied to seat the annuloplasty ring. Antithrombotic therapy with dalteparin sodium should be started when the volume of drainage from the thoracic cavity is less than 3 mL/h and continued for 1 week. Administration of an antiplatelet agent is necessary for 1 -3 months after surgery.

If left untreated, severe mitral regurgitation has a poor prognosis in canine patients.1 In most cases, dogs are not expected to survive for >1 year, even mitral valve repair.51 Other surgeons have re¬ported long-term survival (>3 years) after mitral valve repair.14 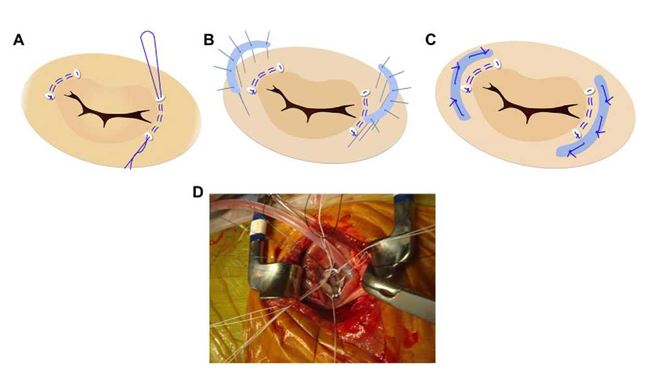 Figure 4 Dog with severe mitral regurgitation before and after mitral valve repair.

if given medical treatment.1,2 Mitral valve repair and replacement, however, both improve prog¬nosis in dogs with mitral regurgitation.10,12,13,16,17 We observed 93% survival at 38 months after

Figure 5 Thoracic radiographs before (A) and after (B) mitral valve repair demonstrating significant decrease in cardiac size. 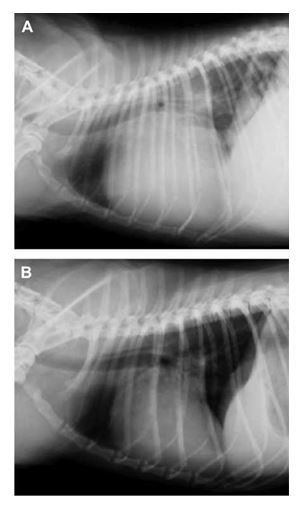 The author has no conflicts of interest to declare.

The author acknowledges surgical team members. This study was supported in part by a Grant-in-Aid for General Scientific Research (C-22580369) from the Ministry of Education, Culture, Sports, Science and Technology, Japan; a grant from the Ministry of Health, Labour and Welfare, Japan; and a NUBS Research Grant in both 2009 and 2011.