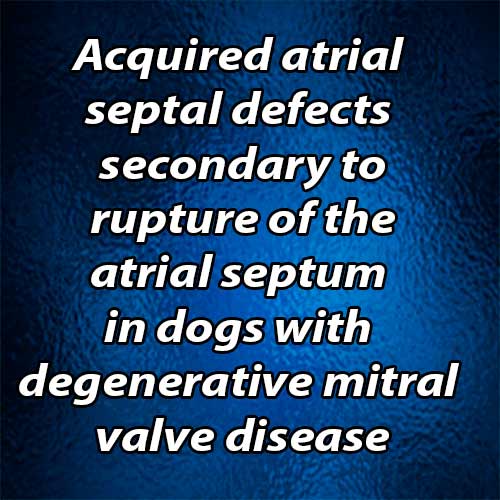 Acquired atrial septal defects (ASDs) secondary to atrial septal rupture are uncommon in dogs with degenerative mitral valve disease. Echocardiographic diagnosis of these defects has not previously been described. The echocardiographic features in two cases identified antemortem are presented in this report. ASDs can be difficult to identify on two-dimensional echocardiogram when relatively small in size and may be underreported. Acquired ASDs may alter the physiology, treatment plan and prognostic implications for the dogs in which they occur and their presence should be considered in all cases of degenerative mitral valve disease that develop signs of right-sided heart failure.

In both dogs, there was no radiographic evidence of left-sided congestive heart failure, and abdominal fluid analysis was consistent with a modified transudate. Clinical diagnoses were consistent with right-sided congestive heart failure and myxomatous atrioventricular valve degeneration prior to further diagnostic imaging. A standard echocardiogram3 was performed in both dogs (dog 1 under sedationb).

Figure 1 Right parasternal short axis 2-dimensional (A), color Doppler (B), and spectral Doppler (C) echo- cardiographic images at the heart base of dog 1

A 1.5 mm defect in the atrial septum is identified in A (arrow). A high velocity, continuous left-to-right atrial level shunt across this defect is documented in B (diastolic frame) and C. Ao = Aortic root, LA = Left atrium, RA = Right atrium. 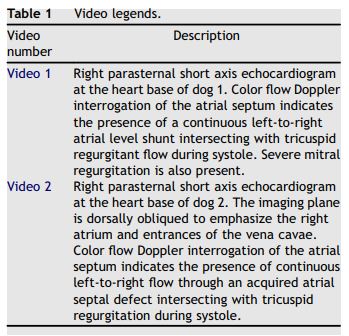 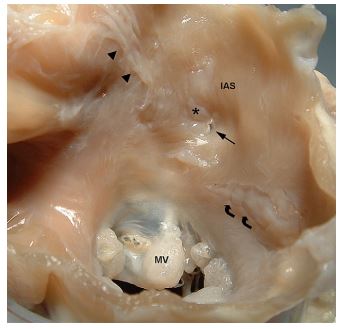 Gross pathology (Fig. 3) of dog 2 confirmed the echocardiographic findings. Endocardial jet lesions were noted in the left atrium along with regions of thinning and nonperforating splitting of the endocardium of the caudal wall. Pericardial adhesions were present over some of these areas but perforation of the caudal wall was not identified. Anatomic closure of the foramen ovale was complete. A 7 mm x 3 mm, vertical nonperforating endocardial split was noted on the left atrial side of the atrial septum parallel and immediately caudal to the fossa ovalis ridge. At the ventral and caudal- most aspect of this lesion a 1 mm x 2 mm perforation in the atrial septum was noted. Numerous jet lesions and nonperforating splits were present over the remaining left atrial endocardium.

Acquired ASDs secondary to MVD in dogs are rare and previously identified on necropsy and diagnostic catheterization, only.1,c In contrast, rupture of the caudal wall of the left atrium, including echocardiographic features, in dogs with MVD is well described.1—6,d In 50 dogs with left atrial endocardial splits, 11 (22%) had rupture of the caudal wall and hemopericardium while seven (14%) had acquired ASDs.1,c,d The clinical presentations of dog 1 and dog 2 were consistent with the few cases previously described.3 Difficulty in identifying dog 2’s ASD during 2-dimensional echocardiogram was attributed to the smaller size and slightly more cranial location of this dog’s defect. Significant tricuspid regurgitation on color flow Doppler can make identification of the left- to-right shunt difficult during systole.

Thus, it is possible that acquired ASDs in dogs with MVD may occur more commonly than is believed or reported. In general, identification of the defects on two-dimensional echocardiography was most consistent on short axis views. It is possible that dog 1’s ASD was congenital since the dog was not previously evaluated and is alive at the time of this publication. However, the presence of a congenital ASD would have allowed the right atrium to serve as a low pressure 'sink’ for the left atrium in the early stages of this dog’s mitral valve disease and the extreme left atrial enlargement noted in this dog would have been less likely to develop, particularly given the relatively large size of the defect and shunt identified on two-dimensional and color flow Doppler imaging [shunt fractions (Qp/Qs) were not calculated in either dog due to lack of demonstrated reliability of this calculation using transthoracic imaging in dogs].

The etiology of spontaneous endocardial splitting in dogs remains unclear but is likely multifactorial, related to increased left atrial volume and pressure and mechanical trauma to the endocardium induced by the regurgitant jet. Endocardial splitting may be preceded by rupture of mitral valve chordae tendinae and genetically- influenced variations in endocardial tissue may predispose certain dog breeds to endocardial degeneration and splitting.1 ,d Specific factors may play a role in rupture of the atrial septum. The thin, slightly translucent portion of the fossa ovalis is a site of anatomic weakness in the normal atrial septum.7,d All previously documented cases of atrial septal rupture in dogs occurred in close proximity to the fossa ovalis, most commonly as an extension of a nonperforating split in the caudal wall.2,d Experimental (dogs) and clinical (humans) echocardiographic studies of acute mitral regurgitation secondary to chordae tendinae rupture demonstrated a characteristic pattern of exaggerated motion, systolic fluttering, systolic premature anterior motion, and increased amplitude of motion of the atrial septum (reflecting an increase in systolic left atrial-to-right atrial pressure gradients) in these patients.8,9 These motions may create additional mechanical stress on the atrial septum that could contribute to rupture.

In contrast to rupture of the caudal wall causing hemopericardium, rupture of the atrial septum may offer a hemodynamic advantage to a dog with elevated left atrial pressure by providing a low pressure "sink” into which the left atrium can unload similar to that which occurs in Lutembacher syndrome in humans (mitral stenosis with congenital or acquired ASD).10 The left-to-right shunting of blood causes volume overload to the right side of the heart, elevated systemic venous and pulmonary arterial pressures, and potentially right-sided heart failure, which is rarely acutely life-threatening and can be managed more easily than left-sided heart failure in dogs. Size of the ASD, transatrial pressure gradient, and relative compliances of the left and right ventricles will impact the degree of shunting. Peak velocities across the ASDs were relatively elevated in both dogs reported here despite the presence of right-sided heart failure, emphasizing the significant elevations in left atrial pressure present in each dog.

Buchanan JW, Kelly AM. Endocardial splitting of the left atrium in the dog with hemorrhage and hemopericardium. J Am Vet Radiol Soc 1964;5:29-39.