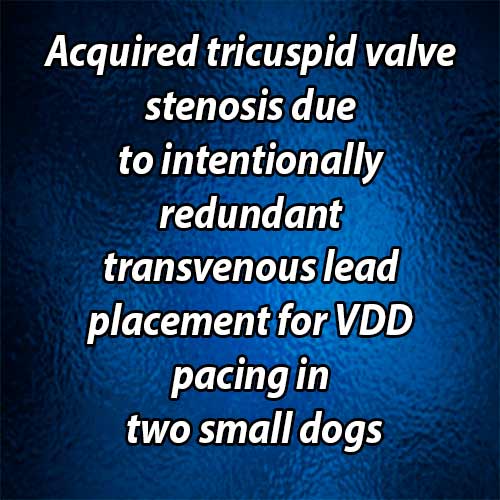 Placement of an endocardial VDD pacing lead in small dogs (<12 kg) may necessitate a redundant lead remaining looped in the right atrium for appropriate sensing and pacing. This report documented acquired tricuspid valve stenosis in two small dogs between 8 months and 4 years after VDD pacemaker placement for third-degree atrioventricular block. Echocardiography and Doppler echocardiography identified elevated transtricuspid flow velocities, prolonged pressure half-times, decreased valve leaflet excursions, and tricuspid regurgitation in both cases. Both cases were euthanized secondary to this pacing complication. Necropsy was performed in one case and confirmed adherence between the redundant lead loop, atrial and valve tissue. While VDD pacing in dogs has proven hemodynamic benefits, these benefits have not been demonstrated in terms of survival benefit or clinical signs. The requirement of redundant lead placement in small dogs for appropriate VDD lead function creates potential deleterious effects that should be weighed against the possible clinical value of VDD pacingin these patients.

A 12 year-old male, castrated, 11.6 kg West Highland White Terrier was referred to the University of California (UC), Davis Veterinary Medical Teaching Hospital (VMTH) for re-evaluation 3 years and 9 months after VDD pacemaker placement. In October 2010, a CapSureVDD-2 (Model 5038S)1 52 cm, 11.5 cm A-V distance, passive-fixation, bipolar lead was placed at the same institution for management of third-degree atrioventricular block (3AVB) without reported complications. The dog had no significant medical history, and at intermittent rechecks his pulse generator was pacing and sensing appropriately. No echocardio- graphic or radiographic reevaluations were performed during this 3 year and 9 months interval. The dog was reported to be progressively more lethargic over the previous 3—4 months; however, no episodes of fainting or collapse were noted. The dog had a single episode of vomiting 2 days prior to presentation, and was presented to the family veterinarian for further evaluation. On physical exam, his pulse rate was 60 bpm and there were no other recorded significant findings. A complete blood count, serum biochemistry, and urinalysis were performed. Complete blood count was consistent with a moderate, macrocytic, normochromic, poorly regenerative anemia with meta- rubricytosis [Hct 23% (ref 36—60%); MCV 83 fL (ref 65—75 fL); nRBCs 3/100 WBCs (ref 0/100-0/100 WBCs)]; there was a normal leukocyte count with a mild lymphopenia (485/uL, ref 1000—4000/uL) and absolute monocytosis (1358/uL, ref 150-1200/uL).

Moderate thrombocytopenia (84,000/uL, ref 150,000—400,000/uL) was also present. Serum biochemistry showed hypoalbuminemia (1.7 g/dL, ref 2.7—4.4 g/dL) and mild alkaline phosphatase elevation (294 IU/L, ref 5—131 IU/L). Urinalysis was unremarkable. The dog was referred to the Cardiology Service at UC Davis VMTH for further evaluation. Upon presentation, the dog had pale mucous membranes and a heart rate of 120 bpm. There was a grade II/VI left apical systolic murmur and a grade I/VI right apical systolic and diastolic murmur noted. Hepatomegaly was appreciated, as was mild cervical subcutaneous edema. Pacemaker interrogation revealed appropriate pacing and sensing, with the exception of instances of noise reversion. To address noise reversion, the ventricular refractory period was decreased from 330 ms to 270 ms.

Echocardiography showed decreased excursion of the septal leaflet of the tricuspid valve and close proximity of the adjacent transvenous pacing lead (Video 1). This finding generated concern that the tricuspid valve leaflet may have been entrapped by the pacing lead. The valve leaflets were hyperechoic, with marked thickening and marked decreased diastolic excursions. The spectral Doppler profile was consistent with severe tricuspid valve stenosis (Fig. 1), with increased transtricuspid flow velocities (E-wave velocity = 1.01 m/s, A-wave velocity = 1.97 m/s), and the E—F slope was decreased, which was consistent with prolonged deceleration of early diastolic right ventricular filling.1 Mean transtricuspid pressure gradient was increased at 5.53 mmHg [>5 mmHg in humans is indicative of severe tricuspid valve stenosis (TVS)] with a maximal velocity of 1.97 m/s after atrial systole (normal <1.00 m/s).2 Pressure half-time (PHT) was increased (200 ms [normal <50 ms]).1 There was mild tricuspid regurgitation on color Doppler assessment, with a subjectively dilated right atrium. 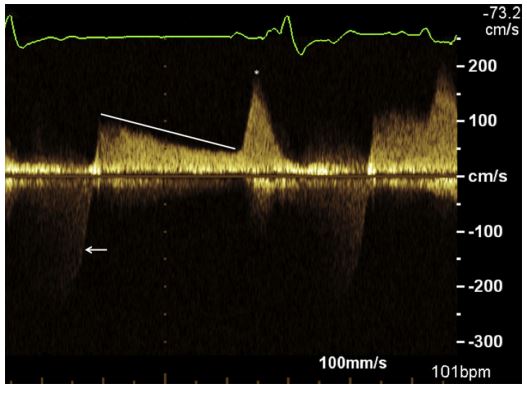 The tracing shows a prolonged deceleration of early diastolic right ventricular filling (white line) and an elevated velocity (asterisk) after atrial contraction consistent with tricuspid valve stenosis. There is also evidence of tricuspid regurgitation as evidenced by systolic flow away from the transducer (arrow).

Figure 2 Right lateral thoracic radiograph obtained from Case 1 almost 4 years after pacemaker implantation, demonstrating placement of redundant lead forming a loop within the right atrium (arrow) at the level of the tricuspid valve. An additional loop of redundant lead is seen in the neck (asterisk). 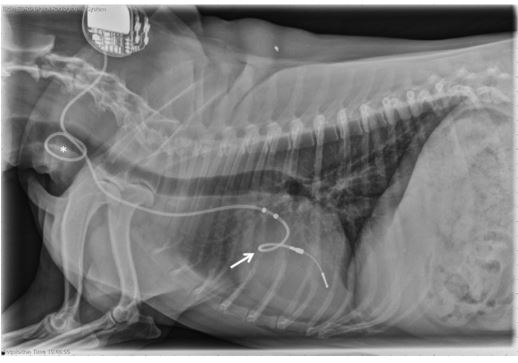 A 14 year-old male, castrated, 6.3 kg, Jack Russell Terrier was presented to the UC Davis VMTH for lethargy and ventral neck swelling. A VDD Medtronic, Model #5038Sc, bipolar, passive-fixation VDD lead with an 11.5 cm A—V distance was placed 10 months before, at the same institution, for management of 3AVB. The owners of the dog noted progressive neck swelling, which began a week prior to presentation, and the dog had become lethargic with intermittent agitation. On physical examination there was an area associated with the right ventral neck, which was presumed to be subcutaneous edema. A grade IV/VI right apical systolic murmur was noted, with a heart rate of 150 bpm. Biochemistry panel revealed a mild azotemia and hypoalbuminemia [BUN 46 mg/ dL (ref 11—33 mg/dL), Creatinine 1.7 mg/dL (ref 0.8—1.5 mg/dL), Albumin 3.1 g/dL (ref 3.4—4.3 g/ dL)] with no other significant findings. Thoracic radiographs revealed a small volume of pleural effusion and evidence of peritoneal effusion.

The cardiac silhouette exhibited moderate and progressive generalized enlargement, with prominent convexity to the right side when compared with radiographs obtained at the time of pacemaker implantation. The pacemaker lead appeared to make a tight loop within the right atrium at the level of the tricuspid valve, with the tip of the lead terminating at the level of the right ventricular apex (Fig. 3). Echocardiography revealed right atrial and ventricular dilation, with the pacemaker lead adhered to the septal leaflet of the tricuspid valve. This leaflet had minimal diastolic excursion that moved in conjunction with the adjacent region of the pacing lead. Color Doppler assessment revealed turbulence across the valve in systole and diastole, which was consistent with tricuspid insufficiency and stenosis (Video 2). Spectral Doppler transtricuspid flow profile revealed increased A-wave velocities, with a maximal velocity of 1.22 m/s (Fig. 4). The tricuspid mean pressure gradient was increased at 5.3 mmHg (normal in humans <5 mmHg).2 The PHT was prolonged, with a value of 132 ms (normal <50 ms).1 Mild anechoic pericardial, pleural, and peritoneal effusion was also noted. A diagnosis of acquired TVS with resultant right-sided CHF was made. The treatments that were initiated included: furosemide 12.5 mg PO q 12 h, spironolactone 6.25 mg PO q 24 h, pimobendan 2.5 mg PO q 12 h, and enalapril 2.5 mg PO q 12 h. The dog’s clinical signs were medically managed for 3 weeks prior to clinical decline, at which time the owners elected for euthanasia. Gross necropsy findings included adherence of the pacemaker lead to the septal leaflet of the tricuspid valve as well as to the atrial myocardium. (Fig. 5) Histologic assessment of the tricuspid valve showed extensive fibrosis of the septal leaflet of the tricuspid valve in the immediate region of lead adherence. Myxomatous change was found in all leaflets. However, in the septal leaflet at the level of the observed adherence, the fibrosis was judged to be severe with extensive expansion of the spongiosa layer and early chondroid metaplasia; there was no evidence of infection. 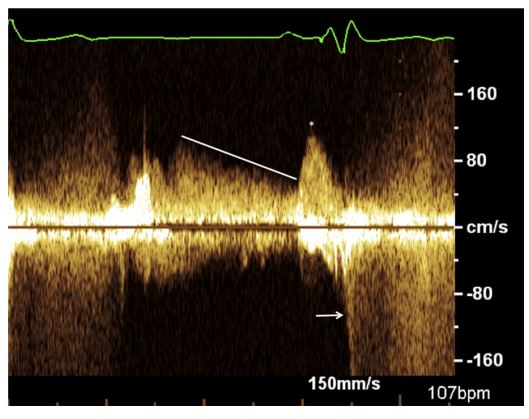 Redundant, looped lead is present within the right atrium (arrow). 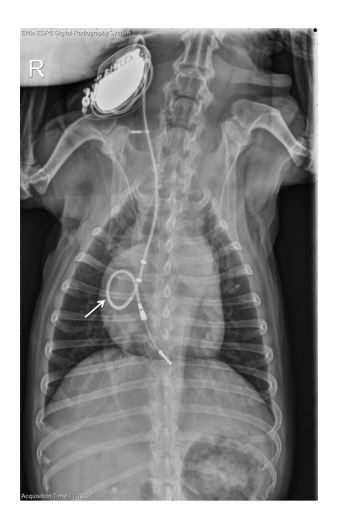 There is also evidence of tricuspid regurgitation, as evidenced by systolic flow away from the transducer (arrow). 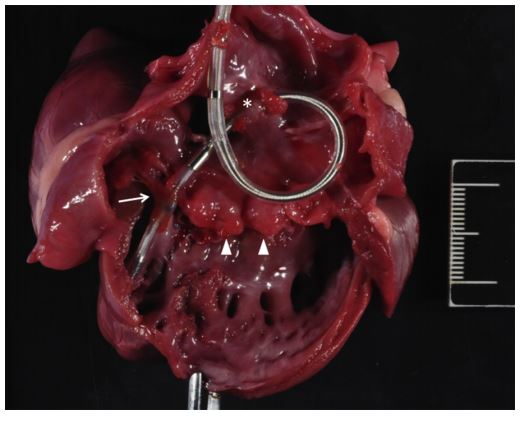 While VDD pacemaker placement has proposed clinical benefits secondary to hemodynamic improvement and reported benefits in human studies, survival improvement and client- perceived quality of life benefits have not been identified in dogs.8-12 In order to achieve optimal placement of a VDD lead, the floating atrial electrodes (FAE) must be able to sense P waves without interference from ventricular events. This requires placement of the FAE within the high-to mid-right atrium.13 Given the available lead AV distances ranging from 11 to 13 cm, proper placement of the FAE required for P-wave sensing in small dogs typically necessitates redundant or excessive lead within the right atrium or cranial vena cava. A previous suggestion to manage this lead redundancy is the creation of a loop of lead within the right atrium.14 This technique was employed for both cases reported here. The presence of redundant or excess transvenous pacing lead within the right side of the heart has been associated with acquired tricuspid valve stenosis in a dog with single-chamber VVIR pacing.4 The stenosis was presumed to be secondary to lead-induced irritation of the valve leaflet and the endomyocardium, resulting in a marked fibrous reaction; this has been called the 'whiplash effect’ or 'whiplash injury’ in human publications.15,16

Acquired tricuspid valve stenosis has been reported as a complication of transvenous pacemaker placement in humans.15-18 The stenosis may be secondary to perforation or laceration of the valve leaflets during placement, endocarditis, or adherence between redundant lead and valve tissue.15-18 In the first case reported here, endocarditis was initially suspected, although a diagnosis of such was not confirmed. It is thought that the lead entrapment created a substrate for endothelial damage and subsequent inflammation, although primary tricuspid endocarditis leading to stenosis cannot entirely be ruled out. In the second case, no evidence of valve perforation or endocarditis was noted. It is possible that, as documented in one dog and multiple human reports, excessive lead left in the right side of the heart places dogs at risk of acquired TVS. The requirement of redundant lead placement in small breed dogs in particular, for appropriate VDD lead function, creates potential deleterious effects. The risk of a redundant pacing lead causing tricuspid valve stenosis is not unique to VDD leads, and is one of the reasons why other lead systems are typically placed with care to avoid lead redundancy. These case reports suggest that the right atrial loop technique for VDD lead placement should be avoided - particularly in small dogs (<12 kg bodyweight).