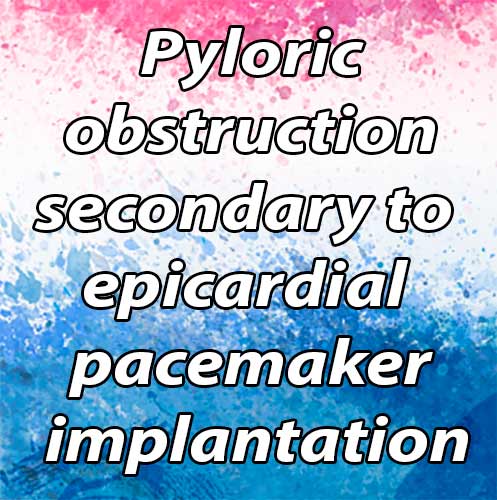 A 10-year old Lhasa Apso dog was presented for an acute history of exercise intolerance and hind limb weakness. High grade second degree atrioventricular block with an atrial rate of 200 beats per minute, ventricular rate of 40 beats per minute and an intermittent ventricular escape rhythm, was diagnosed on electrocardiograph. A transdiaphragmatic, unipolar, epicardial pacemaker was implanted without immediate surgical complications. Severe vomiting was noted 12 h post-operatively. Abdominal ultrasound and a barium study supported a diagnosis of pyloric outflow obstruction and exploratory abdominal surgery was performed. The pyloric outflow tract appeared normal and no other causes of an outflow obstruction were identified. The epicardial generator was repositioned from the right to the left abdominal wall. Pyloric cell pacing was presumed to be the cause for the pyloric obstruction and severe vomiting, and this was thought to be due to close proximity of the pacemaker generator to the pylorus situated in the right abdominal wall. Repositioning of the pulse generator to the left abdominal wall resulted in resolution of vomiting.

A 10-year old, 9.6 kg, female Lhasa Apso dog was examined by the Emergency and Cardiology service at the University of Wisconsin Veterinary Medical Teaching Hospital with a 3-day history of lethargy, hind limb weakness and exercise intolerance. The dog was unwilling to go on her routine walk, and when posturing to urinate, was not able to get back up. Previous evaluation by the referring specialty center showed no relevant hematologic abnormalities. An electrocardiogram was performed and a tentative diagnosis of third degree atrioventricular block was made.

On examination at the dog was depressed with pale mucus membranes and a capillary refill time of 3 s. Thoracic auscultation revealed a bradycardic regular rhythm (heart rate of 40 beats per minute [bpm]). No heart murmur was present at the time and femoral pulses were strong and synchronous.

Electrocardiographic findings included a sinus tachycardia with an atrial rate of 200 bpm, a predominately ventricular escape rate of 40 bpm and a diagnosis of high grade second degree atrioventricular block. Atropine, 0.1mg/kg, was administered intramuscularly and there was an inappropriate response with no increase in the ventricular heart rate and the high grade second degree atrioventricular block did not resolve. Thoracic radiographs showed a vertebral heart score of 10.5, mild left atrial and mild left ven¬tricular enlargement. All vessels appeared within normal limits and there was no evidence of pulmonary pathology. A transdiaphragmatic epicardial pacemaker was scheduled.

The patient was premedicated with 0.4mg/kg atropine intravenously (IV), 0.14mg/kg hydromorphone IV, 0.1mg/kg midazolam IV, induced using 0.39mg/kg etomidate IV, and anesthesia maintained with isoflurane in oxygen. A multiparameter monitor was used to assess vital parameters. A constant rate infusion of lactated Ringer’s solution at 50 mL/h was administered and 22mg/kg cefazolin was given IV every 2 h until the end of surgery. A ventral midline abdominal incision extending from the pubis to the xiphoid was made. The diaphragm was incised and a 3 cm incision was made in the pericardium over the cardiac apex region. A unipolar, button-tip pace¬maker lead was secured in the apex of the left ventricular wall. The pacemaker lead was sutured to the epicardium and the pericardial incision was left open.

The pleural space was evacuated by placing a 16 French thoracostomy tube through the eighth intercostal space. The diaphragm was closed with absorbable suture in a continuous pattern. The pacemaker generator unit was anchored into a 6 cm created craniocaudal pocket, under the lateral right transverse abdominis muscle, caudal to the liver. The abdominal wall was closed in a standard fashion and the patient recovered uneventfully from anesthesia. The pacemaker was interrogated and programmed with the following settings; ventricular pace, ventricular sense, inhibition response and rate adaptive (VVIR) mode, lower rate: 80 bpm, higher rate: 140 bpm, and average daily living (ADL) rate 100 bpm.

The patient appeared anxious and painful on the day after surgery. A single 25mcg fentanyl patch and intermittent hydromorphone injections were used for pain control. Continuous telemetry showed the pacemaker was adequately pacing at an intermittent artificial pacing rate of 80 bpm. Twitching of the abdominal muscles overlying the pacing unit was noted. Throughout the day, the patient was noted to be vomiting fluid and metaclopramide (0.1 mg/kg/hr constant rate infusion) was administered. An echocardiogram was performed to look for an underlying heart condition that could have caused the observed symptoms, and thoracic radiographs were taken. Echocardiography and thoracic radiographs did not reveal any important findings. The placement of the pacemaker was unchanged from immediately after surgery.

The patient seemed less painful the following day, but vomiting continued at moderate amounts and frequency. The thoracotomy tube was removed and a complete blood count and chemistry panel tests were performed. These tests revealed a mild leukocytosis with a predominant neutrophilia. There were no relevant hematologic abnormalities. Abdominal ultrasonography revealed a very motile and largely distended stomach containing fluid and some food, despite the patient having not eaten in over 48 h. Transit of ingesta through the pylorus was not identifiable. A pyloric outflow obstruction was suspected , and an upper gastrointestinal contrast study was performed, using 130 ml of barium sulfate suspension administered via orogastric tube. Diagnostic interpretation was delayed gastric emptying due to partial pyloric outflow obstruction. Differential diagnoses considered at this time were gastric neoplasia, pyloric hypertrophy or proliferative gastritis.

Two days after pacemaker implantation, the patient was prepared for surgery to explore/ relieve the pyloric outflow obstruction. The dog was premedicated with IV 0.15mg/kg hydro- morphone and 0.1mg/kg midazolam, and induced with 2.5mg/kg propofol IV. Anesthesia was main¬tained with isoflurane in oxygen. The entire gastrointestinal tract was examined for causes of outflow obstruction. The pylorus was incised at the level of the antimesenteric border and the lumen was exposed. No gross cause for pyloric outflow obstruction was identified. The pylorus was closed transversely in two layers and a pyloroplasty was not performed. However, it was noted that the pylorus was in contact with the abdominal wall in close proximity to the pacing unit. Cardiac pace¬maker placement was examined and the pacemaker generator was repositioned from the right lateral parietal peritoneum to the left side and secured in the same fashion as described pre¬viously beneath the transversus abdominis muscle. The lead wire was also repositioned lateral along the abdominal wall and secured in place with a simple interrupted suture using 3-0 Prolene. All layers of the abdominal wall were closed in a standard fashion and the patient recovered uneventfully from anesthesia.

Shortly after surgery, the patient’s vomiting completely resolved. The following morning, the dog was non-painful. A constant rate infusion of fentanyl at 2—4 mcg/kg/hr was maintained throughout the day and 5.2mg/kg enrofloxacin IV, 22mg/kg cefazolin IV, 0.5 mg/kg famotidine IV and lactated Ringer’s solution with 20 mEq/L KCI (30 mL/h) was continued. Metoclopramide was discontinued. The dog was offered small amounts of food and water every 4 h, and no more vomiting occurred. The patient was discharged from the hospital 2 days after pyloric surgery and subsequent examinations confirmed reso¬lution of vomiting and adequate pacing by the pacemaker.

Pacemaker implantation has been used as a routine procedure for bradyarrhythmias for decades [1]. Despite the transvenous approach being the pacemaker implantation method preferred by veterinary cardiologists, epicardial pacing is still commonly used for specific indications in small animals, with small body size being the most important factor [2]. Pacemaker implantation technology has considerably advanced within the last fifty years and a more standardized surgical approach for transvenous and epicardial pacing has been accepted [3]. The two most frequently used epicardial surgical approaches are transdiaphragmatic or intercostal thoracotomy [2,3].

With the transdiaphragmatic-approach the pacemaker generator is typically placed under the transverse abdominis muscle and with an intercostal thoracotomy-approach, the pacemaker generator can be placed elsewhere in a deep pocket covered by subcutaneous adipose tissue. In general, the use of bipolar vs. unipolar pacing has been patient selective, although, unipolar leads are more frequently used to this day [2]. In veterinary patients, the electrode is most commonly implanted along the left cardiac apex in order to secure the lead in the thickest part of the myocardium and to avoid the thin right ventricular wall. Lead fixation and generator implantation have been typically placed along the left body wall, under the transversus abdominis muscle [1—3]. Although it is generally described as an uncomplicated and life-saving procedure, the most frequently observed complications associated with epicardial pacing have been pace- related complications, such as loss of capture with subsequent lead dislodgement, and cardiac arrhythmias [2,4]. Skeletal muscle twitching near the pacemaker generator site has also been observed [1,2]

In this case, upon further investigation of the potential cause of persistent vomiting, it was found that the antral muscle of the canine stomach contains pacemaker cells with the ability to respond to stimulation [5]. Pacemaker cells populate all regions of the circular muscle and propagation velocities have been stimulated above normal antral frequency by electrical pacing or acetylcholine [5]. Data from these studies have further shown various pathways for active propagation throughout the antral tunica muscularis [5,6]. Given these findings, electrical pacing of these cells via the unipolar pulse generator due to its close physical proximity seems highly likely in this case.

In conclusion, surgical epicardial pacemaker procedures with placement of the pacemaker generator on the right body wall and in close proximity to the pylorus may induce chronic stimulation of the pyloric cells and induce vomiting. It is hypothesized that the generator caused pacing of the pyloric cells, leading to subsequent pyloric obstruction . The complete cessation of intractable vomiting after relocation of the pulse generator to the left side supports this suspicion. There are no reports in the veterinary literature of pyloric cell pacing due to pulse generator proximity and further studies are needed to define the extend of pyloric cell pacing via unipolar pacemakers. However, the results of this case provide strong supportive evidence to avoid placement of a pacing unit in proximity to the antrum or pylorus.