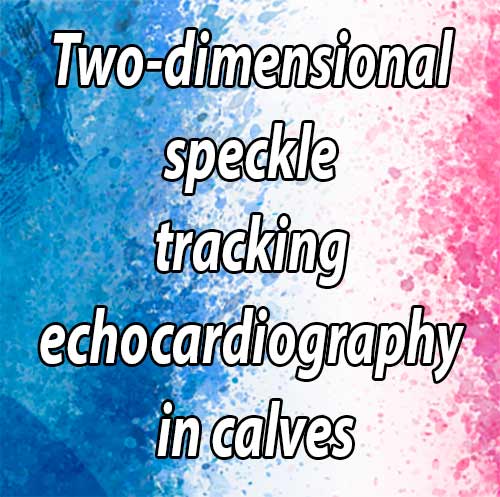 OBJECTIVES: To assess the feasibility and repeatability of two-dimensional speckle tracking echocardiography for the evaluation of left ventricular function in healthy calves.

RESULTS: Two-dimensional speckle tracking was feasible in all calves. Automated tracking was better in systole than in diastole. Repeatability of the technique was good in calves. Systolic radial strain and strain rate peak values showed little variability compared with systolic circumferential strain and strain rate and to all diastolic measurements. Variability of the interobserver measurements was greater than the intraobserver measurements.

Early diagnosis of cardiac diseases in the bovine species is difficult based on clinical signs only [1]. However, early recognition of those patients might improve treatment outcome or avoid unnecessary costs associated with the treatment of an animal with a poor prognosis.

Many cardiac diseases in cattle, and particularly in calves, directly affect the myocardium including primary dilated cardiomyopathy [2,3], cardiomyopathy secondary to bacterial or viral infections [4,5], vitamin E/Selenium deficiency [6], or intoxication with ionophore [7] or doxycycline [8—10].

Two-dimensional speckle tracking (2DST) echocardiography is an innovative technique that allows quantitative assessment of regional and global systolic left ventricle function based on a frame-by-frame tracking of acoustic speckles on two-dimensional grayscale conventional images [11,12]. The relative measurement of deformation of a myocardial segment is described by its strain (e.g. lengthening or shortening compare to its original size). The strain rate represents the speed at which this deformation occurs [13,14]. Both parameters provide complementary information and have been used to quantify the myocardial function in humans, dogs, cats, horses, and goats [13,15—22].

The goal of this study was to assess the feasibility and reliability of 2DST echocardiography for quantification of circumferential and radial strains and strain rates and displacement of the left ventricle in short-axis views at papillary muscle level in healthy calves.

Image acquisition was performed using a Vivid I ultrasound unitd with a 1.5—3.6 MHz phase-array transducere. The calves were standing and man¬ually restrained during the procedure. A modified base-apex electrocardiogram was recorded simul¬taneously. At least 4 cine-loops of right parasternal shot-axis views of the left ventricle were recorded in 2D mode at papillary muscle. Cine-loops covered 5 to 6 cardiac cycles with a frame rate ranging between 51.2 and 79.7.

Two-dimensional speckle tracking measurements were performed offline and blindly by a single observer (LL) with a dedicated systemf,g in a semiautomated manner using the Q-analysis and 2D- Strain application of the software. After selection of a single cardiac cycle, RR interval was recorded, simultaneous heart rate was calculated, and the loop was frozen at the end of systole. A circular region of interest (ROI) was drawn manually fol¬lowing the inner margin of the endocardium, clockwise, starting at 12 o’clock at the level of the interventricularseptum. Papillary muscles were not included. Region of interest width was then adjusted to cover the entire myocardium. Speckle tracking started automatically as soon as this operation was done dividing the ROI into 6 seg¬ments, labeled according to human guidelines (septal: SEPT; anteroseptal: ANTSEPT; anterior: ANT; lateral: LAT; posterior: POST; inferior: INF; Fig. 1). 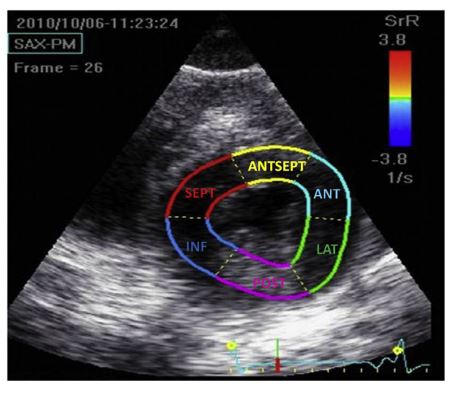 The degree of intra- and interobserver variability was defined based on the coefficient of variation (CV) expressed as a percentage and calculated as follow:

Results of two-dimensional measurements of the left ventricle are presented in Table 1 and are similar to previously published values [23].

Two-dimensional speckle tracking analyses were feasible in all calves at all times. Mean heart rate during echocardiography was 83 ± 10 bpm (60-106 bpm).

Automated tracking by the software was generally confirmed visually by the operator. Manual correction was necessary in 31/180 segments (14 LAT, 12 POST, and 5 INF) because of poor tracking quality at the end of diastole although tracking appeared sufficient during the remaining of the cycle. Therefore, these segments were included in the analysis, and all myocardial segments in all calves were used for the study. Cursors could reliably be placed on all peaks [18].

The curves for each variable are presented in Fig. 2. As described in other species [12,18,20-22], all segments of the myocardium showed a positive inflexion for SR, SrRS, SrCE, SrCA, and DR, whereas negative inflexions were observed for SC, SrCS, SrRE, and SrRA. In all calves, peak radial strain for all segments occurred after aortic valve closure (Fig. 2B), a phenomenon called postsystolic thickening.

Intra- and interobserver repeatability and variability

Intraobserver repeatability was good for all peak values except SEPT SC (p=0.0145). An interobserver effect was observed in 4/91 peak values (SEPT SC and SrCE, INF SrCA and LAT DRS; all p<0.05).

Table 1 Two-dimensional echocardiographic meas¬urements of the left ventricle of the 12 healthy calves used for the 2DST study.

To the authors’ knowledge, this is the first study evaluating the feasibility and repeatability of 2DST in calves. Short-axis 2DST can be used to evaluate 2DST in calves 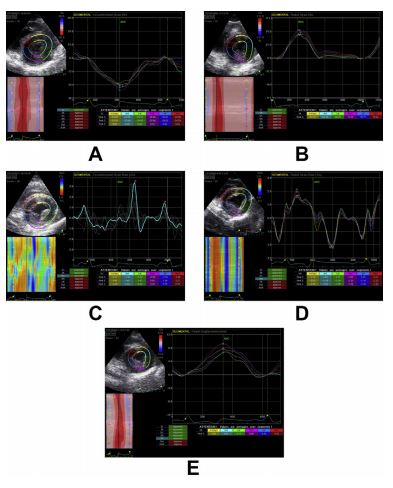 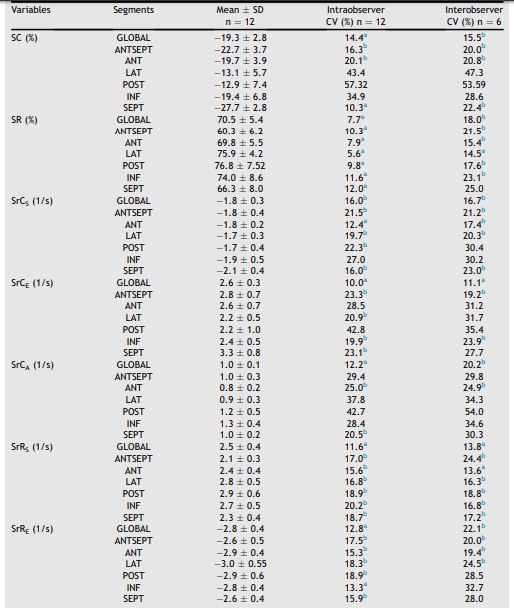 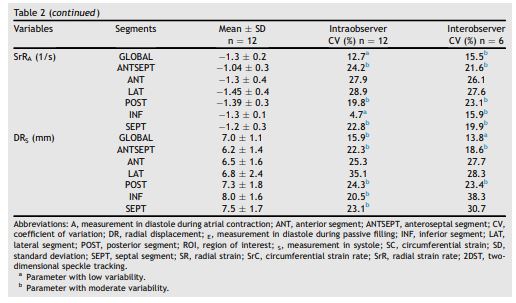 Two-dimensional speckle tracking echocardiography is a non-invasive technique used to assess myocardial deformation and displacement of the left ventricle . Although it has been validated in several species, this had never been done in cattle [12,18,20—22,24]. Many cardiac diseases affect the myocardium in calves and when performed, evaluation of left ventricle function is usually done by conventional two-dimensional echocardiography, M-mode, or flow Doppler methods [23,25—28]. Several limitations can be outlined for these methods. Visual appreciation of the left ventricle in two-dimensional images or cine-loops is subjective, fractional shortening calculated in M-mode rely only on measurements over a narrow area obtained from a three-dimensional structure and therefore lacks accuracy to detect regional wall motion abnormalities, whereas Doppler echocardiography is angle dependent [29]. Two-dimensional speckle tracking relies on frame-byframe tracking of acoustic speckles on 2D images. It is angle and load independent and allows objective evaluation of regional wall motion and deformation [11,12,24,30,31]. Although it requires a high frame resolution and good two-dimensional image quality, this was not difficult to achieve in calves of that age.

Each variable presented a repeatable curve pattern. The SR and SrR curves were the most reproducible. Curves for strain, strain rates, and displacement were similar to those obtained in other species such as dogs, horses, and goats [20—22]. Large differences between segments were observed for the SC with lower peak values reported in the left ventricle free wall segments (LAT and POST). Similar variations were observed in horses [18] and goats [21]. This is probably due to a decrease of lateral resolution when deeper structures are imaged with a curvilinear/phase- array probe (divergence of the ultrasound beams at higher depth) [32].

Measurement divergences between species can be affected by many factors but keeping that in mind, peak values obtained for calves are similar to values obtained for goats [21], while absolute values of systolic and diastolic SrC and SrR are generally higher in calves than in horses [18,20]. This larger circumferential wall deformation could be due to the faster resting HR in calves compared with horses while the percentage of deformation remains the same but studies in dogs did not show significant modifications of 2DST parameters with increasing heart rate [33,34]. On the other hand, absolute values of DRS are smaller in calves than in horses [18,20]. This could be explained by the relatively smaller thorax of calves compared with horses.

Post-systolic thickening is defined as myocardial thickening occurring after aortic valve closure, during the isovolumic relaxation phase of the diastole. It was observed for all segmental peak values of SR in all calves evaluated in this study. It is usually observed in ischemic myocardial diseases but has also been observed in healthy animals [35—37]. As we did not have any evidence of cardiac impairment of the calves involved prior and throughout the study period, we considered it normal in our population. 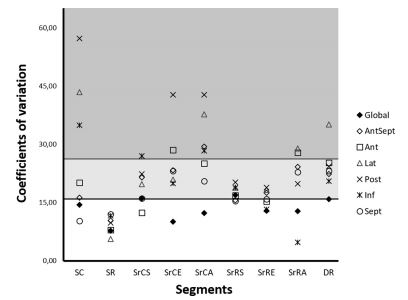 As in other studies, CVs were used as a measure of the relative spread of the data to assess variability and thus reliability of inter- and intraobserver two-dimensional speckle tracking (2DST) measurements. Several factors can affect the repeatability and variability of an examination: animal behavior, physiologic variations, environmental factors, technical considerations (transducer placement, machine settings, ultrasound machine, two-dimensional speckle tracking (2DST) measurements modalities) [20,38]. To minimize the sources of variability, examinations were performed at the barn in a quiet environment, and calves were accustomed to the procedure before starting the study. Operators used the same high-quality ultrasound equipment with standardized settings. Two-dimensional images were recorded and stored for further analyses, and all measurements were performed over a short period of time by one reader. Several measurements obtained for the evaluation of the systolic left ventricle wall function, especially SR and SrR, showed good intraobserver and acceptable interobserver variability, encouraging their use in a clinical setting in further studies. Interobserver measurements showed a lot more variability than intraobserver measurements which was also reported in other species [20,39].

This could probably be explained by slightly dif¬ferent techniques of image acquisition between the observers and day-to-day alterations of the behavior or environment of the calves. Inter- and intraobserver variabilities were assessed on sepa¬rate days. It is probably not ideal to minimize biological variability and environmental factors but is more representative to what happens in a clinical setting where several examinations are repeated on successive days and not always by the same clinician. True alteration of the parameters due to disease or treatment should be larger than the day-to-day variability observed when the same equipment, environment, operator’s experience and image acquisition protocols are used. Many cardiac diseases in calves affect the myocardium, and some can occur as outbreaks such as doxycy- cline intoxications, or cardiomyopathies due to selenium deficiency [8,10,40,41]. Most of the time those pathologies are discovered late in the course of the disease process when clinical signs of cardiac failure are already obvious and cardiac impairment is easily assessed with two¬dimensional echocardiography. In humans and horses, two-dimensional speckle tracking (2DST) was useful in the early detection of left ventricle impairment [16,42,43]. In calves too, it could help detecting ventricular pathologies earlier to decide to treat or cull those animals. A clinical trial should be the next step to evaluate if this is possible in calves.