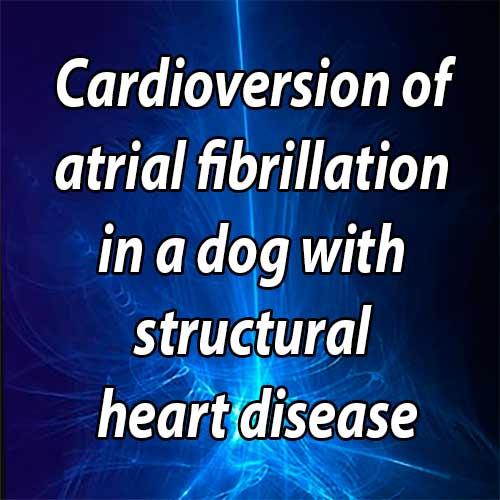 A 3-year-old, female intact mixed breed dog, weighing 20.3 kg, was referred to the veterinary teaching hospital at Michigan State University’s College of Veterinary Medicine for evaluation of a recently diagnosed murmur and ascites. The dog was presented to the referring veterinarian for evaluation of exercise intolerance, chronic vomiting and diarrhea. The referring veterinarian noted a basilar continuous murmur and an irregularly irregular heart rhythm during the physical examination and referred the dog for further evaluation. Referral blood work available at the time of presentation revealed a mild hypoproteinemia of 4.5 g/dL (reference range, 5.1—7.5 g/dL) with a mild hypoalbuminemia of 2.1 g/dL (reference range 2.5—4.0 g/dL), azotemia with a blood urea nitrogen of 36 mg/dL (reference range 7—27 mg/dL), and hyperchloremia of 118 mEq/L (reference range 105—115 mEq/L). Complete blood count and total T4 were within reference limits for normal dogs. A urinalysis obtained via cystocentesis revealed proteinuria (3+ out of 4+), trace gluco- suria (100 mg/dL), a large amount of heme, pyuria (40—50 white blood cells/hpf), and hematuria (too numerous to count/hpf). Physical examination confirmed a grade 5/6 continuous murmur over the left heart base. The heart rate was rapid with an irregularly irregular rhythm. Femoral arterial pulses were weak and irregular with multiple pulse deficits. No jugular venous distension or pulsations were noted. Abdominal distension with a fluid wave was noted.

The following week the dog returned for interventional closure of the patent ductus arteriousus (PDA) and cardioversion of AF. The dog was premedicated with 0.5 mg/kg (11 mg) of methadone IM, induced with 3.9 mg/kg (80 mg) of propofol IV, and maintained under general anesthesia using isoflurane to effect in 100% oxygen. The dog also received lactated Ringer’s solution at 10 mL/kg/h throughout the procedure, and 30 mg/kg (640 mg) of cefazolin IV q 90 min peri-operatively. The dog was placed in left lateral recumbency and a 7-Fr introducera was introduced percutaneously into the right external jugular vein using a modified Seldinger technique and secured in the right external jugular vein. A 5- Fr pigtailb catheter was passed to the junction of the cranial vena cava and the right atrium (RA) and a mean central venous pressure (CVP) of 11 mmHg was recorded. A 10-Fr decapolar defibrillating catheterc was passed oroesophageally using fluoroscopic guidance to the level of the carina, with the distal pole just aboral to the carina (Fig. 1). The distal pole of the defibrillation catheter was used as the cathode and the remaining poles of the defibrillation catheter electrically linked to increase the surface area were used as the anode. Transesophageal cardioversion was attempted using a monophasic defibrillatord with the defibrillation shock synchronized to the R waves. Defibrillation was unsuccessful using synchronized shocks of 10 and 20 joules (J). The esophageal catheter was left in place, and a 7-Fr decapolar electrophysiology cathetere was introduced into the right jugular vein and advanced using fluoroscopic guidance into the RA (Fig. 1). To increase the total surface area of the cardioversion electrodes, poles 1—6 of the esophageal catheter were electrically linked and used as the cathode while poles 1 —10 of the decapolar electrophysiology catheter were electrically linked and used as the anode. Confirmation of catheter and electrode positions was repeatedly confirmed fluoroscopi- cally. Atrial cardioversion was unsuccessful using synchronized monophasic shocks of 10 and 20 J but was successful following a synchronized monophasic shock of 50 J (Fig. 2). After 5 min of normal sinus rhythm the mean CVP was again measured and found to be 10 mmHg. 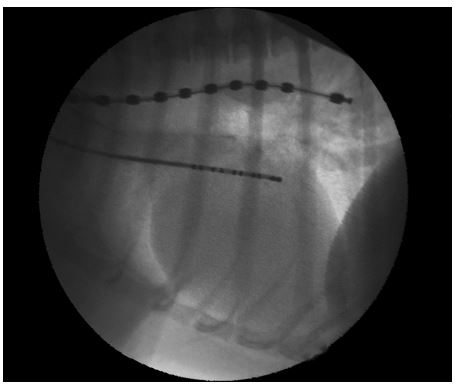 Following successful cardioversion of atrial fibrillation (AF) to normal sinus rhythm, the PDA was closed in routine fashion using a 12 mm canine duct occluderf placed through the left femoral artery using a percutaneous approach. Complete occlusion of the PDA was confirmed by transesophageal echocardiography with color flow Doppler. The CVP remained unchanged immediately following PDA closure. Post-operatively the dog was administered 0.25 mg/kg (5 mg) of methadone IV and 0.025 mg/kg (0.5 mg) of acepromazine IV, followed by 3.7 mg/kg (75 mg) of tramadol PO q 8 h for analgesia when awake. The dog was monitored with continuous ECG overnight, with isolated atrial premature complexes noted periodically. A transthoracic echocardiogram and ECG were performed 24 h after the procedure. No residual flow was noted through the PDA. No dramatic changes in systolic function or cardiac size were noted at this time. The ECG revealed normal sinus rhythm with no abnormalities. The dog was discharged 24 h after the procedure without complication. Therapy with enalapril and spironolactone was continued while therapy with diltiazem was discontinued at that time.

The dog was re-evaluated at 6 weeks and at 6 months after patent ductus arteriousus (PDA) closure and cardioversion. At recheck the physical examination revealed no abnormalities. No complications were reported by the owner at any time. At each recheck an ECG revealed a normal sinus rhythm and echocardio- graphic examination showed complete closure of the PDA. At the 6 month echocardiographic examination mild decreases in left atrial and ventricular dilation and mild improvement in systolic function were noted. A brief abdominal ultrasound confirmed the absence of ascites at each recheck.

The arrowheads indicate synchronization of the defibrillator with the QRS complex. The asterisks mark small P waves. Paper speed of 25 mm/s.

This report highlights the first reported synchronized cardioversion of atrial fibrillation (AF) secondary to structural cardiac disease in a dog using an electrode positioned within the esophagus and an electrode positioned in the RA. Using a synchronized 50 J monophasic shock, atrial cardioversion was successfully achieved in this dog without observable complications. Lower levels of energy may have been successful but the minimal possible step up was not used in this patient to minimize the total level of energy used. Use of a biphasic waveform to perform cardioversion is recommended and should provide lower cardioversion thresholds and therefore less myocardial damage compared to a monophasic waveform. Cardioversion attempts with both electrodes positioned within the esophagus were unsuccessful, however it is possible that defibrillation using a biphasic waveform or higher levels of energy would have been successful. Further evaluation of transesophageal cardioversion (TEC) and ICC of atrial fibrillation (AF) is necessary to determine if these methods will provide a low energy alternative to transthoracic cardioversion (TTC) in dogs with naturally occurring heart disease.

No authors have any conflicts to disclose.