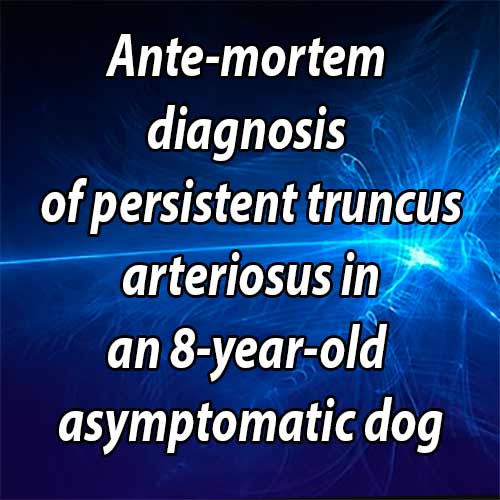 Persistent truncus arteriosus (PTA) was diagnosed in an 8-year-old neutered male Poodle referred for echocardiographic examination prior to anesthesia for surgical correction of bilateral cataract. A single large artery limited by a bicuspid valve and overriding both ventricles was observed with 2 distinct pulmonary arteries arising from the common arterial trunk. A large size interventricular septal defect was associated with a low velocity bidirectional shunt. The lesion was identified as a Type 3 PTA according to Collett and Edwards' classification. Although no clinical signs were reported, the dog presented polycythemia (packed cell volume=68%) at the time of diagnosis. To our knowledge, this is the first report of an echocardiographic diagnosis of PTA in the dog. Until now, the ante-mortem diagnosis of this congenital heart disease has only been described in the cat. This case is also of interest because of the age of the animal and the total absence of cardio-respiratory signs at the time of diagnosis.

An 8-year-old 10-kg neutered male Poodle was referred to the Ophthalmologic Unit of the National Veterinary School of Alfort for evaluation of a bilateral cataract of rapid onset. External chest trauma secondary to a dog bite had been reported 4 years previously. The dog had no history of clinical signs related to disease of the respiratory or cardiovascular system. However, its history was incomplete as it had been adopted by the present owner when adult (4 years old).

Table 1 Conventional M-mode variables compared to normal ranges (for a 10 kg dog except for fractional shortening).2-4 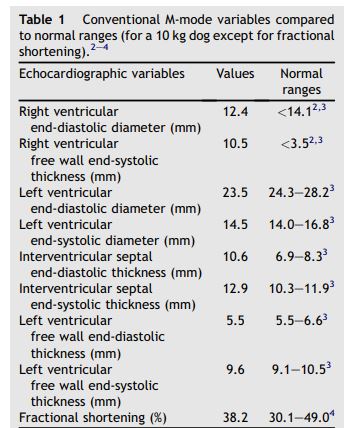 Physical examination was unremarkable except for slightly hyperemic mucous membranes. Cardiac auscultation revealed a grade V/VI right apical systolic heart murmur with normal heart rate (120 beats per minute). Ocular examination confirmed a bilateral cataract associated with lens anterior subluxation and mild uveitis on the left eye. It was decided to perform an electro- retinographic examination before surgical correction of the cataract. The dog was therefore referred to the Cardiology Unit of Alfort for echocardiographic examination to evaluate the cardiac risk associated with the anesthetic procedure.

Two-dimensional (2D) echocardiography, color- flow imaging, and spectral Doppler examinations were performed using an ultrasound unitc equipped with 2.2-5 and 3.5-8 MHz phased-array transducers. The dog was unsedated throughout the ultrasound examination and was gently restrained in the standing position as previously described and validated by our group.1 Conventional 2D and M-mode data are given in Table 1. The M-mode echocardiogram showed marked hypertrophy of the right ventricular free wall and the interventricular septum with a slightly decreased left ventricular end-diastolic diameter and a flattened interventricular septum (Figure 1, Table 1). A large defect was identified at the base of the interventricular septum (Figure 2). Color- flow Doppler examination (Figure 2B and C) demonstrated a low velocity bidirectional interventricular shunt (right-to-left in diastole and left- to-right in systole). A single large artery overriding the septum and originating from both ventricles was visualized (Figure 2A). No other artery arising from the left or right ventricle was observed. The single artery had one valve formed by 2 large symmetrical cuspids which were identified on left apical short axis views (Figure 1B). Coronary arteries were identified at the base of the truncus as small sized vessels with dilated ostia and tortuous aspect. Two symmetrical pulmonary arteries arising from both sides of the common arterial trunk were also visualized (Figure 1C).

These findings were characteristic of a Type 3 persistent truncus arteriosus (PTA) according to the Collet and Edwards’classification.5 A peak systolic flow velocity through the truncus of 2.6 m/s was identified. Color-flow Doppler examination did not reveal any diastolic insufficiency. Bidimensional echocardiography as well as pulsed-wave and color Doppler mode examination were not suggestive of stenosis of the associated valve. Owing to marked modifications of heart basis morphology, right and left atrial diameters could not be measured using conventional methods. However, the two atrial cavities appeared subjectively normal. Mitral and tricuspid regurgitations (MR and TR, respectively) with slightly thickened mitral and tricuspid valves were identified using color and continuous Doppler mode applied to the left apical 4-chamber view. Both regurgitations were considered as mild, i.e., with maximal area of the regurgitant jets (on color Doppler mode examination) representing less than 30% of left and right atrial areas, respectively. Continuous Doppler mode examination of these regurgitations revealed high velocity flows (of 6.0 m/s for MR and 6.5 m/s for TR). This was suggestive of similar right and left ventricular systolic pressures, which was consistent with the finding of a large interventricular septal defect and a low bidirectional interventricular shunt velocity. The right ventricular pressure overload also explained the right ventricular concentric hypertrophy observed. 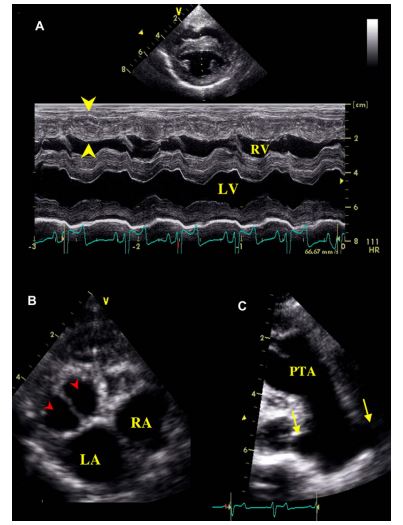 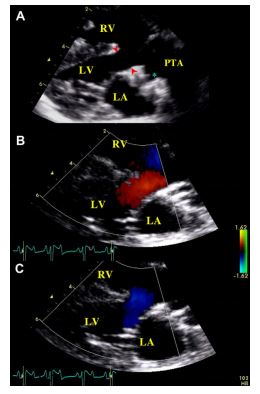 Persistent truncus arteriosus results from failure of the spiral septum (that arises from infundibulum truncal ridges) to develop during fetal growth.5,6 The spiral septum normally partitions the fetal truncus into 2 main arteries, i.e., the pulmonary trunk and the aorta.7 An absence of septation in the embryologic truncus results in a single large artery closed by a single valve, arising from the base of the heart and supplying the systemic, pulmonary and coronary blood flows. A ventricular septal defect is always present due to the absence or underdevelopment of the distal portion of the pulmonary infundibulum.5—7

In humans, persistent truncus arteriosus (PTA) originates from the right ventricle in 42% of cases, from both ventricles in 42% (as in our case), and from the left ventricle in 16%.18 Various congenital cardiac abnormalities have been reported to be associated with PTA in humans too, including truncal stenosis or insufficiency, interrupted aortic arch, persistent right aortic arch, aortic coarctation, abnormal pulmonary venous return, patent foramen ovale, and coronary artery abnormalities (single coronary artery or displacements of coronary ostia).18—21 The latter are some of the most common defects associated with persistent truncus arteriosus (PTA), and have been reported in up to 30% of cases in humans.18—21 Similarly, in the case described here, PTA was associated with both abnormal coronary arteries and systolic atrioventricular regurgitations. However, it cannot be stated for certainty that the latter were not just concurrent acquired valvular abnormalities.

Figure 3 Classification of truncus arteriosus type, according to Collet and Edwards.5 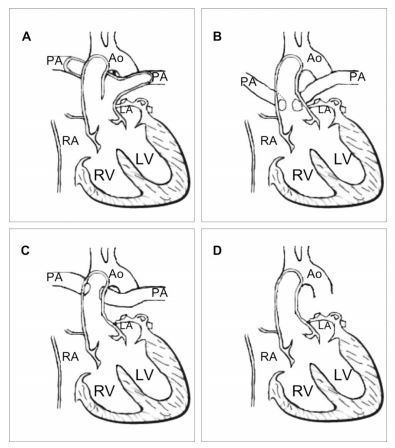 In humans, the truncus valve is tricuspid in most cases (42e75%), but may also be uni-, bi- or quadricuspid.18,22 In the case presented here, the truncus valve was bicuspid. This is observed in up to 30% of cases in humans,18,22 but has not been described to our knowledge in dogs or cats (tricuspid10,11 and quadricuspid12 in the cat and tricuspid17 in the dog). The prognosis for PTA in the dog remains unknown. In children, up to 64% of cases die within the first 6 months of life when persistent truncus arteriosus (PTA) is left untreated.23 Causes of death include metabolic acidosis, myocardial dysfunction (related to pulmonary hypertension) and arrhythmia. However, patients with untreated PTA who attain adulthood are not exceptional. A few cases of PTA diagnosed in adult and elderly people have been described.24,25 In one of the latter, long-term survival (48 years) was in part attributed to concomitant Ehlers—Danlos syndrome, a hereditary collagen synthesis defect, which may have limited the development of secondary pulmonary hypertension by interfering with pulmonary artery intimal proliferation.25

Surgical correction of persistent truncus arteriosus (PTA) consists of closure of the interventricular septal defect with connection of the truncus to the left ventricle and connection of the pulmonary arteries to the right ventricle using a valved conduit, the latter being either a homograft or xenograft. The prognosis is good for such surgical treatment in humans.19,23 However, survival relies on age at diagnosis and the presence of associated cardiac abnormalities, which may reduce survival at discharge from 91 to 71%.19,23 However, despite major improvements in cardiac surgery, one-third of human patients remain symptomatic after surgery and re-operations are necessary in almost half of them.19,23 As the dog described here was relatively aged, presented no clinical signs and had concurrent abnormal coronary arteries, such a surgical treatment, which has not been described to date in domestic animals, was not proposed. In conclusion, this case report illustrates that a complex and cyanotic congenital heart disease such as persistent truncus arteriosus (PTA) may be an incidental finding and may also be associated with long-term survival in the dog as already described in humans.24,25 This case is also of interest because it is the first reported echocardiographic and Doppler description of such a malformation in the dog.

This report was supported by the resident grant program of Vetoquinol Pharmaceutical Laboratory, Lure cedex, France.