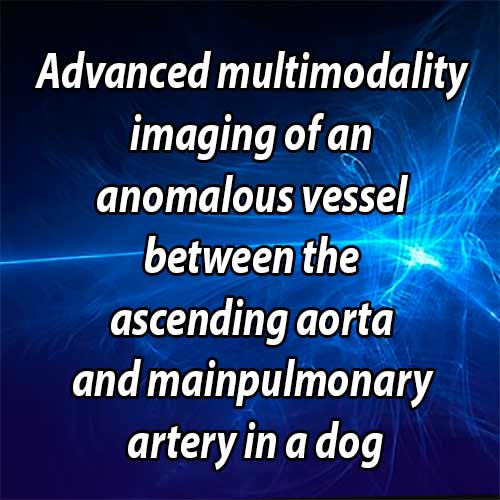 A 1-year-old male German shorthaired pointer was referred for evaluation of tachypnea and hemoptysis. A grade VI/VI left basilar continuous murmur was ausculted. Multimodality imaging consisting of thoracic radiographs, transthoracic and transesophageal echocardiography, fluoroscopy-guided selective angiography, computed tomography angiogram (CTA) and magnetic resonance angiogram (MRA), was performed on this patient. The defect included a left-to-right shunting anomalous vessel between the ascending aorta and main pulmonary artery, along with a dissecting aneurysm of the main and right pulmonary artery. An MRA post-processing technique (PC VIPR) was used to allow for high resolution angiographic images and further assessment of the patient's hemodynamics prior to surgical correction. This case report describes the clinical course of a canine patient with a rare form of congenital cardiac disease, and the multiple imaging modalities that were used to aid in diagnosis and treatment.

A 1-year-old male German shorthaired pointer was referred to the University of Wisconsin Veterinary Medical Teaching Hospital for evaluation of tachypnea and hemoptysis after an altercation with a porcupine. The dog was obtained from a breeder at 16 weeks of age and reportedly had coughing and exertional syncope since that time. A grade VI/VI left basilar continuous murmur was ausculted when the dog was examined by the cardiology service. Severe cardiomegaly was observed on three-view thoracic radiographs, with marked left atrial and ventricular enlargement, pulmonary venous congestion, and an interstitial to alveolar lung pattern consistent with pulmonary edema (Fig. I — Data available in supplemental data online).

The patient was hospitalized, and treatment with furosemide, nitroprusside and dobutamine was initiated. Transthoracic echocardiography showed severe left ventricular eccentric hypertrophy with a normal ejection fraction of 61%. There was continuous, turbulent left-to-right shunting of blood in the main pulmonary artery (MPA), which was most consistent with a patent ductus arteriosus (PDA). An extra membrane of tissue was seen in the mid-MPA into the right pulmonary artery (RPA) (Fig. II — Data available in supplemental data online, Video 1). Continuous turbulent flow extended only to the level of the extra membrane and did not reach the pulmonic valve (Video 2). The presumptive diagnosis was a left-to-right shunting PDA with severe left-sided volume overload, left-sided congestive heart failure, and extra membranous tissue in the MPA and RPA.

Single plane fluoroscopy-guided selective angiography was performed to further investigate the anatomy and determine if an Amplatz® Canine Duct Occluder device would be suitable for closure of the communication between the aorta and MPA. Injection of contrast material into the right ventricle demonstrated a filling defect in the cranial portion of the proximal MPA that was thought to be associated with the intraluminal membranous tissue identified on transthoracic echocardiography (Fig. 1A, Video 3). Contrast material delivered by right-sided injection entered only the vasculature of the right-sided lung lobes (Fig. 1A). Injection of contrast material into the descending aorta failed to provide evidence of a classic PDA. Contrast material instead entered the MPA from the distal ascending aorta (Fig. 1B, Video 4). A left-to-right communication between the ascending aorta and the MPA was diagnosed, and differential diagnoses for this defect included an aortopulmonary window or an anomalous vessel. Transvascular occlusion was not considered a feasible treatment option because of the location of the communication and the abnormal membrane in the MPA.

A 64-multidetector prospectively-gated cardiac computed tomography angiogram (CTA)e was performed to further classify the anatomy and assist in surgical planning. The levophase CTA showed a 1.5-cm diameter anomalous vessel connecting the distal ascending aorta to the MPA and an aneurysmal dilation of the MPA at the entry level of the anomalous vessel. A linear filling defect was present in the cranial lumen of the proximal MPA, traveling towards the RPA. The dextrophase showed incomplete contrast filling of the MPA and selective flow to the RPA. An anomalous vessel connecting the distal ascending aorta and MPA with a suspected dissecting aneurysm in the MPA and RPA was diagnosed (Fig. 2).

A magnetic resonance angiogram (MRA) was recommended prior to surgery to further evaluate the hemodynamics, and this was performed using a 3T unitf (Video 5). A large (2.7 cm x 1.5 cm) anomalous vessel was seen traversing the ascending aorta and MPA. An MPA aneurysm (2.8-cm diameter) was observed adjacent to the aorta (1.8-cm diameter). Post-MR processing using a 4D velocity mapping method (phase contrast vastly undersampled isotropic projection reconstruction or PC VIPR) was performed to further evaluate hemodynamics. PC VIPR showed a vortex of blood with central stagnancy in the MPA aneurysm (Fig. 3). In addition, PC VIPR analysis demonstrated that 60% of aortic blood flow was supplying the lungs. The large LPA, noted on thoracic radiographs and CTA, was due to blood flow from the aorta, crossing the vessel and supplying the left lungs. The dissecting aneurysm appeared to prevent flow of blood from the right heart to the left pulmonary artery. 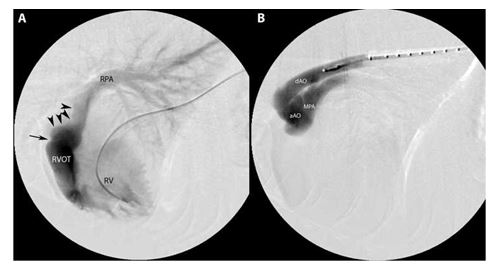 One month later, the patient returned for surgical ligation of the anomalous vessel between the ascending aorta and MPA. Results of hemodynamic assessment from PC VIPR analysis led to significant concern for pulmonary arterial hypertension complications post-ligation. In an attempt to lower pulmonary vascular resistance, sildenafil and milrinone were started prior to the procedure. Anesthesia was induced in a routine manner and maintained with isoflurane in oxygen. The heart and great vessels were exposed via a left lateral thoracotomy performed through the 4th intercostal space (Fig. III, Data available in supplemental data online). The lateral walls of the aorta and MPA were distinguishable, but there appeared to be fusion of the caudal wall of the ascending aorta to the cranial wall of the MPA from the origin of these vessels to the distal descending aorta. This did not appear to be the result of traumatic injury, because no scarring was observed in the mediastinum cranial or caudal to the heart or within the left lung field. Turbulent blood flow could be palpated across the wall of the aorta and MPA.

Attempts to separate the proximal aorta from the MPA were unsuccessful and resulted in a small hole (2 mm) in the MPA wall. This was closed with a single interrupted suture using 6-0 polypropylene. A dissection plane was created between the distal ascending aorta and left pulmonary artery that provided limited access to the right side of the aorta and MPA.

Transesophageal echocardiography was performed to assess blood flow in the pulmonary circulation and aorta while various test occlusions were performed using vascular forceps or digital pressure. A potential plane of occlusion between the aorta and pulmonary vessels was identified that resulted in an approximately 90% decrease in blood flow from the aorta to the pulmonary circulation while maintaining aortic and pulmonic blood flow. A single suture (20 polypropylene) was passed completely across the lateral and medial walls of the distal extent of the desired plane of occlusion using a swaged taper point needle. The needle was then passed from medial to lateral at the proximal extent of the identified plane of occlusion. When the suture was tightened and tied, abnormal left-to-right blood flow was substantially (approximately 90%) reduced, and blood flow was maintained in the aorta and pulmonic vasculature. A thoracostomy tube was placed, and the chest was closed in a routine manner.

Figure 2 Transverse plane prospectively-gated 64-multidetector row computed tomographic angiography of the heart. Images are displayed at three levels from cranial to caudal at the level of the anomalous vessel. 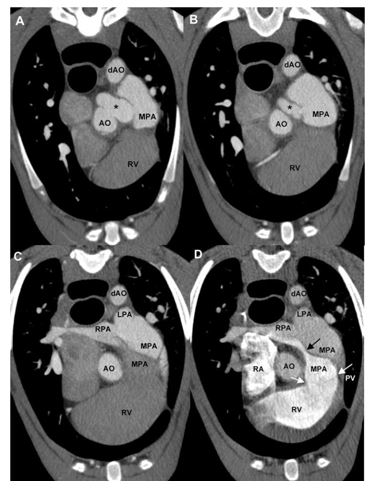 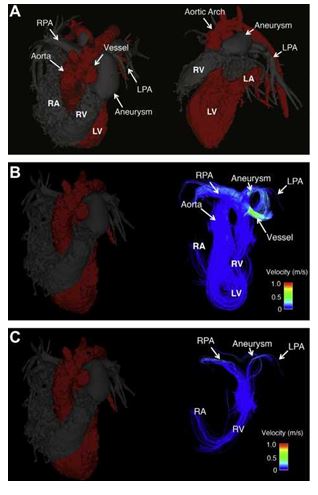 Mild residual flow between the ascending aorta and MPA was detected by both transesophageal and transthoracic echocardiography after surgery. The patient returned for an MRI study three months after surgery. PC VIPR analysis showed minimal flow through the anomalous vessel and reduction in size of the MPA aneurysm (Fig. 4).

Congenital communication between the ascending aorta and the MPA is a rare but important lesion, as it can mimic the clinical picture of a PDA. Described anomalies of aortopulmonary communication have included aortopulmonary window, an aberrant vessel connecting the great vessels, truncus arteriosus, anomalous origin of a pulmonary artery from the aorta, aorticopulmonary fistula, arteriovenous shunt, aortopulmonic vascular malformation, or a persistent 5th aortic arch with systemic to pulmonary circulation.1-8 There are limited reports in veterinary medicine of communication abnormalities between the ascending aorta and pulmonary circulation in the dog.1,7-12 This case was also unique due to the formation of the pulmonary artery aneurysm (PAA). Pulmonary artery aneurysm is a rare lesion, with an incidence of approximately 0.007% in people.13 As was demonstrated in this case, the most common etiology of PAA is congenital cardiac disease that results in a large left-to-right shunt, and from pulmonary arterial hypertension.13

The MRA performed on this patient was also used as a baseline for further advanced post-processing techniques (PC VIPR). Three-dimensional, three-directional velocity-encoded, time-resolved (4D) flow-sensitive MRI was performed with a previously described technique (PC VIPR)14 with the following parameters: VENC (velocity encoding) = 150 cm/s; isotropic acquired spatial resolution = 1.25 mm, TR (repetition time) = 8.9 ms; TE (echo time) = 3.0 ms, scan time approximation 14 min. PC VIPR provides isotropic, high spatial resolution angiographic images and multi-directional flow data which can be used to visualize and quantify flow throughout the imaged volume.15 This technique has been used to assess alterations in right heart blood flow patterns and MPA hemodynamics in healthy human volunteers and human patients with repaired tetralogy of Fallot.16 PC VIPR can also determine whether pulmonary artery blood flow patterns are normal with laminar flow versus abnormal with increased helical or vortex-like flow.16 The use of 4D flow-sensitive PC VIPR techniques to study alterations in flow dynamics in the heart may therefore provide a better understanding of the RV-PA coupling in patients with PAH, and hence play an important role in future diagnosis and follow-up of this detrimental disease.

Figure 4 4D — Flow MRI. Velocity streamlines in the heart and great vessels before (left) and after (right) surgery 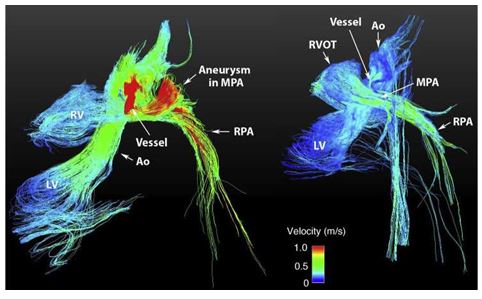 An anomalous vessel connecting the ascending aorta to the main pulmonary artery was diagnosed in this dog, and this defect, along with the dissecting aneurysm, were thought to have created vortex flow features as identified by PC VIPR.

PC VIPR analysis was helpful in determining what percentage of blood flow from the right heart, versus the left heart and through the anomalous vessel, was supplying the lungs. This was important to case management and surgical planning due to the concern of chronic high-flow- induced pulmonary hypertension as a sequela to closure of the defect. Sildenafil and milrinone were started prior to surgery to decrease pulmonary vascular resistance and improve cardiac output, respectively, to prevent high-flow-induced pulmonary hypertension. The complex flow patterns identified with PC VIPR can be used to provide additional hemodynamic information to help predict outcome of surgical treatment of complex congenital cardiac disease.16,17 Post-operative echocardiography provided an accurate assessment of residual flow across the anomalous vessel, and the post-operative PC VIPR study was performed to allow comparison to the pre-operative study.

This case demonstrates utility of multiple imaging modalities for assessment of anomalies of the ascending aorta, MPA, and dissecting MPA aneurysms, as well as the value of this information in planning surgical treatment of these disorders. This is the first reported use of PC VIPR techniques in a clinical canine patient.

The project described was supported by the Clinical and Translational Science Award (CTSA) program, through the NIH National Center for Advancing Translational Sciences (NCATS), grant UL1TR000427. The content is solely the responsibility of the authors and does not necessarily represent the official views of the NIH.