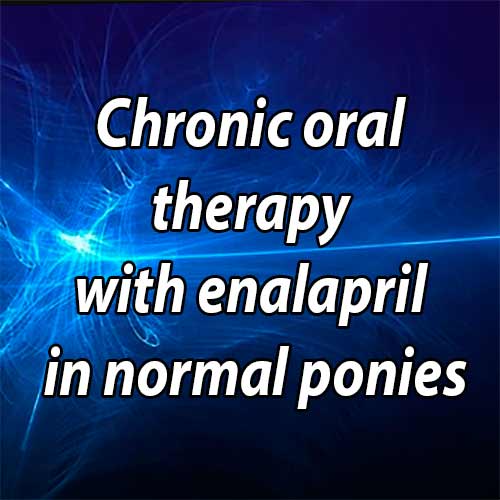 Enalapril is an angiotensin converting enzyme (ACE) inhibitor that is frequently used in human, feline and canine patients with cardiac disease. Its use has been associated with impotence in human patients. The purpose of this study was to evaluate if enalapril (0.5mg/kg PO, q24h) is likely to alter behavior in stallions and to assess its effect on ACE activity at the standard dose used in dogs and cats. Twelve pony stallions were evaluated by physical examination and echocardiography followed by treatment with enalapril (n=6) or placebo (n=6) for 2 months. After one month, blood was drawn and stored to evaluate ACE activity in the 2 groups. At the end of the study, repeat physical examination and echocardiography were performed. Physical examination, echocardiographic indices, and reproductive performance were unchanged and there was no suppression of ACE activity. Results of this study suggest that enalapril (0.5mg/kg PO, q24h) is either poorly absorbed in the horse or is inadequately converted to the active form of the drug, enalaprilat.

The aortic, mitral and tricuspid valves are frequently affected.1 Degenerative valvular changes are seen most commonly in aged horses1 similar to other species. The hemodynamic consequence of valvular insufficiency is volume overload. Once the neurohumoral system is activated, causing vasoconstriction and water retention, myocardial failure with secondary congestive heart failure can occur. Balanced vasodilators such as the angiotensin converting enzyme inhibitors (ACEI) have become a major plank in the treatment of valvular insufficiency and dilated cardiomyopathy in humans, dogs, and cats. Compared to placebo, angiotensin converting enzyme lower the heart rate, mean systemic arterial blood pressure, and mean pulmonary arterial blood pressure while increasing cardiac output and reducing morbidity and mortality in dogs.2-4 Additionally, ACEI have been shown to alleviate symptoms and prolong useful life in humans and dogs.2,5 Enalaprilat, the active metabolite of enalapril, inhibits angiotensin converting enzyme (ACE) activity by more than 75% in horses.6

Because of drug cost in horses, enalapril therapy may be avoided in many cases. Considering the expense, the most likely candidate for ACEI therapy would be the aged breeding stallion with valvular insufficiency, an individual that might gain additional breeding seasons with the benefit of angiotensin converting enzyme therapy. In these cases the cost is most likely to be offset by possible income from the additional breedings. Enalapril is currently the only ACEI approved for use in veterinary species in the USA. However, erectile dysfunction is one reported side effect linked to enalapril therapy in men,7 which could limit its use in breeding animals. The primary purpose of this study was to evaluate the effects of a 2-month course of oral enalapril treatment on erection and ejaculatory function in normal stallions. A secondary objective was to evaluate the effect of chronic, enalapril treatment (0.5 mg/kg PO, q24h) on ACE activity in the equine.

Twelve clinically normal Shetland pony (size 120-300 kg) stallions, aged 3-19 years, with baseline sexual behavior and semen characteristics within the range of normal were used in this study. All stallions were normal on physical examination and complete echocardiographic examination. Echocardiograms were performed with a VingMed echocardiographic machined from the right parasternal window using a 3.5 mHz probe to obtain routine measurements of heart size and systolic function as has been described elsewhere.8 The same sonographer (MMS) performed all examinations and 3 sets of measurements were obtained and averaged for each variable. Matched pairs based on age, baseline semen and sexual behavior characteristics were assigned to the enalapril or control treatment groups. The 6 enalapril subjects were administered 0.5 mg/kg enalapril orally in molasses vehicle daily for 2 months. The 6 control subjects received vehicle only on the same schedule. The investigators remained blind to the group assignments. After one month of treatment, blood samples were collected at 0, 15, 30, 45 min, 1, 1.5, 2, 3, 4, 6, 8, 10, 12, 18, 24, 36, and 48 h post-administration of enalapril to evaluate ACE activity. Blood samples were collected from control ponies at 15, 30, 45 min, 1, 1.5 and 4h post-administration of vehicle. Blood was centrifuged, separated and serum was frozen at -80 °C until ACE activity was assessed (6 years later). Samples were analyzed by the Laboratory Corporation of America using a kinetic test.e During the final week of the study, the 12 ponies were re-evaluated by physical examination and echocardiography.

Sexual function and semen output were assessed in standard semen collection trials conducted twice daily for 5 consecutive days during the week preceding onset of treatment (baseline) and again beginning 8 weeks after the start of treatment (the last week ponies received treatment). Measures of erection and ejaculatory function included erection rigidity (graded as normal erection sufficient for insertion, decreased from normal, or increased tumescence), the number of organized thrusts to ejaculation on the ejaculatory mount, the number of urethral contractions palpable at the base of the penis during ejaculation, gel-free semen volume, gel volume, semen pH, and total number of sperm. Erection was also evaluated in 10-h videotaped samples of spontaneous erections obtained during the last week of treatment. Specific measures included the frequency, duration, and graded tumescence of spontaneous erections, which occur on an average of every 90 min in stallions.

The echocardiographic variables were compared for differences between groups, using the analysis of variance on the difference between pre- and post-treatment values within each horse. This is statistically equivalent to a paired t-test, with each individual horse serving as its own control. ACE activity data were evaluated using SYSTAT Version 11.0.f Repeated measures analysis of variance was used to assess changes within-subjects and differences between groups. A total of 6 time points had complete data in both experimental and control groups (15 min, 30 min, 45 min, 60 min, 90 min, 4 h). The Normality assumption was tested with the Shapiro-Wilk statistic and the Huynh-Feldt treated and control groups were not significant epsilon test statistic was used to test the compound (independent t-tests, p > 0.10). symmetry assumption (the assumption necessary for repeated measures ANOVA, wherein all variances are equal and all co-variances are equal).9

Results indicated that no echocardiographic parameter (Table 1) achieved statistical significance (all p > 0.10). ACE activity at all time points (Fig. 1) conformed to the Normality assumption (all p > 0.05). The Huynh-Feldt epsilon statistic validated the assumption of compound symmetry (p = 0.808). Individual means varied from 37.8 to 113.3 ± 6.55 U/L, reflecting the expected interindividual variation in ACE levels,9 while time- point means varied from 67.0 to 72.7 ± 1.09 U/L. Results of the repeated measures ANOVA indicated no significant differences between groups of subjects (p = 0.797), no significant variation of subjects across time-points (p = 0.732), and no significant interaction of subjects and treatment groups (p = 0.727).

During both the baseline and the final week of treatment, all measures of semen, sexual behavior, and spontaneous erection, were within the range of normal, and differences between treated and control groups were not significant (independent t-tests, p > 0.10). 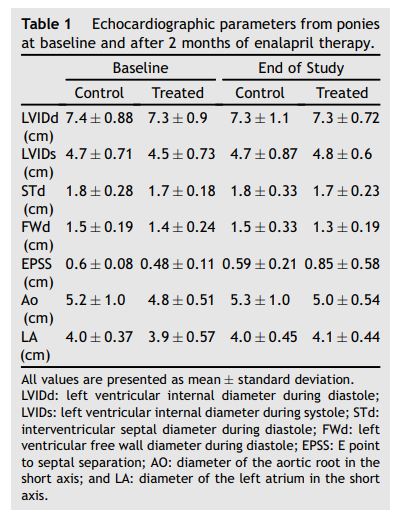 Activation of the sympathetic nervous system and the renin-angiotensin-aldosterone system due to declining cardiac performance results in hemodynamic abnormalities such as excessive vasoconstriction and retention of sodium and water. These imbalances may have direct deleterious effects on the myocardium and result in congestive heart failure.2,3,10 Angiotensin converting enzyme have been shown to improve the quality and duration of life in humans with heart disease,6 and have had similar positive results in canine congestive heart failure trials.2,3,11 ACEI therapy has also been associated with improved exercise time11-15 and in humans with congestive heart failure, gas transfer and ventilation perfusion ratio improved with ACEI therapy.16 However, even before the development of congestive heart failure, there is evidence that ACEI improve the cardiopulmonary response to exercise in patients with systolic ventricular dysfunction.13 Thus, angiotensin converting enzyme therapy in general, and enalapril therapy in particular, could be promising in the equine cardiac patient.

Our results indicate that there was no significant individual variation in ACE activity over time and enalapril (0.5 mg/kg PO, q24h) was ineffective at suppressing ACE activity in the equine. These data suggest that enalapril is poorly available in the equine when administered orally. In light of these results, it is logical that no significant change was detected in the echocardiograms or erection or ejaculation following therapy. Anecdotally, some equine clinicians believe they have seen a positive clinical effect in equine cardiac patients when enalapril is administered at this dose, and it is possible horses with heart disease will respond differently than normal ponies. Therefore, future studies are necessary to document effectiveness of therapy in a diseased group of horses. Alternative approaches including evaluation of enalapril at a higher dose or evaluation of alternative angiotensin converting enzyme in the horse are warranted.

Systemic availability of one dose of enalapril (0.5 mg/kg PO) has been reported to be poor17 but administration of multiple-doses was not performed in this previous study. Our findings are consistent with Gardner et al. and indicate that longer therapy does not alter the effect. Similarly, little accumulation occurs in humans with repeat daily dosing.18 However, intravenous administration of enalapri- lat, the active metabolite of enalapril, suppressed ACE activity by greater than 75% in the horse6 and has also been proven to attenuate the effect of intravenously administered angiotensin I in the horse.19 Taken together with these previous results, our data suggest oral enalapril is either not absorbed adequately by the equine gastrointestinal tract, undergoes intestinal degradation or is inadequately converted to enalaprilat. The definitive cause of poor response warrants further study.

Unfortunately, the delay in performing the ACE analysis resulted in several study limitations. Although ACE degradation could have occurred in the samples, the laboratory specialist believed ACE levels remain stable when stored at -80 °C without thawing prior to being analyzed (personal communication). Additionally, if there had been degradation of samples, all samples (test and control groups) should have been affected similarly since they were all handled in the same manner. Confirming this assessment, angiotensin converting enzyme activity levels from these ponies were similar to previously published normal equine levels (64 ± 13U/L).19 Optimally, enalapril and enalaprilat measurements could have been evaluated to better interpret the results from this study, however, by the time the angiotensin converting enzyme levels were measured, collection of additional samples was no longer possible.

One-month of enalapril (0.5mg/kg PO, q24h) treatment does not suppress ACE activity and does not exert negative consequences on reproductive function in the normal pony stallion.

The authors would like to acknowledge Mr. Dwayne Lavoie for his help with this manuscript. This project was supported by the Ensor Foundation.