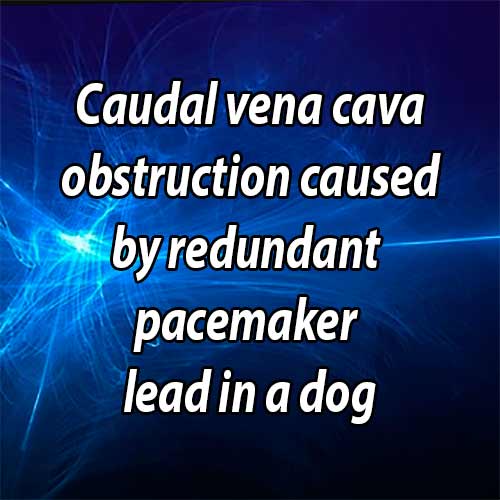 Inferior vena cava obstruction, a rare but serious complication of transvenous pacemaker lead placement in humans, has not been reported in dogs. We describe this complication in a dog that developed ascites 8 months after pacemaker implantation. Radiography disclosed a loop of redundant lead within the caudal vena cava (CVC), and angiography demonstrated obstruction to blood flow. Withdrawal of the loop from the CVC did not restore blood flow. Persistent obstruction was suspected secondary to fibrosis resulting from vascular damage caused by the loop of lead. Angioplasty of the CVC obstruction restored blood flow and resolved the dog's clinical signs.

The patient was premedicated with 0.008 mg/kg acepromazine, 0.27 mg/kg butorphanol, and 0.8 mg/kg ketamine administered intravenously (IV). Anesthesia was induced with 0.19 mg/kg diazepam and 1.9 mg/kg ketamine IV, and maintained with isoflurane in 100% oxygen and a constant rate IV infusion of ketamine at 0.7 mg/kg per hour. Dobutamine was also administered as a constant rate IV infusion at 5 mg/kg per min, and 23 mg/kg of cefazolin was administered IV every 120 min. The right jugular vein was exteriorized and incised for placement of a tined bipolar silicone insulated endocardial pacemaker lead.a Under fluoroscopic guidance, the lead tip was directed to the apex of the right ventricle. However, pacing thresholds in this location were excessively high, and the lead tip was repositioned towards the right ventricular outflow tract region where good pacing thresholds were obtained (<0.5V with a pulse duration of 0.5 msec). Lead impedance was 600—800 ohms, and intrinsic R waves were 8 mV. Additional lead was then advanced into the jugular vein to prevent dislodgement, and the lead was secured with lig- aturesb placed around the lead’s suture sleeve. The lead was then connected to the pacemaker generator, which was placed in a subcutaneous pocket caudal to the scapula. The pacemaker generator was programmed to VVI mode at a rate of 70 bpm, a pulse amplitude of 5 V with a pulse duration of 0.4 msec, and ventricular refractory period of 330 msec. Recovery was uneventful, and the dog was discharged 2 days after the procedure on 19 mg/kg amoxicillin and clavulanic acidc PO q12 h for 10 days, and tramadold to be provided as necessary at 2 mg/kg PO q8 h. Pacing threshold at the time of discharge was 0.5 mV with a pulse duration of 0.4 msec.

The dog was reassessed twice during the 2 months following pacemaker implantation. She responded well clinically, and showed increased energy and no further syncope. At both visits, pacemaker interrogation disclosed a small increase in the pacing threshold (1 mV with a pulse duration of 0.4 msec at both visits). The pacemaker generator was reprogrammed to VVIR mode, with a rate range of 60—180 bpm and a mild to moderate activity level algorithm. No other pacemaker programming changes were made at these visits. Thoracic radiographs were not taken during this time.

A non-selective caudal vena cavagram was performed by injecting 2 ml/kg non-ionic contrast mediumf into the left lateral saphenous vein via an 18 gauge catheter. The study demonstrated complete obstruction of caudal vena cava flow at the site of the loop of pacemaker lead. The loop was surrounded by a large filling defect suggesting an associated thrombus or fibrosis. Flow to the right atrium occurred exclusively via the vertebral sinuses and azygous vein. 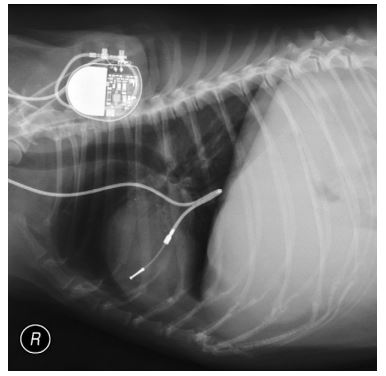 The cardiac silhouette is small (vertebral heart size = 9.0), and a loop of redundant pacemaker lead is present within the caudal vena cava.

Following angioplasty, mean caudal vena cava pressure was 12 mmHg and mean right atrial pressure was 7 mmHg. A selective caudal vena cavagram demonstrated minimal residual narrowing and unobstructed flow from the caudal vena cava into the right atrium (Fig. 2C; Video 3). The dog recovered uneventfully and was discharged 2 days later. On a follow-up evaluation performed 2 weeks after pacemaker lead withdrawal from the caudal vena cava and angioplasty, ascites and hind limb edema had resolved. The complete blood count and serum chemistry panel were unremarkable. Thoracic radiographs demonstrated a substantial increase in the size of the cardiac silhouette (VHS = 11.2) and stable position of the pacemaker lead. On follow-up evaluations performed 7 and 13 months after the procedure, the dog continued to do well with no recurrence of ascites or peripheral edema. 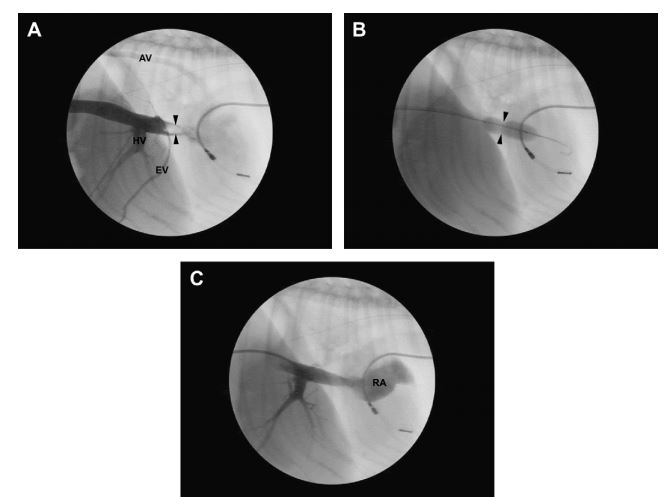 In this case report, we describe caudal vena cava obstruction resulting from a loop of redundant pacemaker lead within the vessel. We are unaware of any previous report of a pacemaker lead causing caudal vena cava obstruction in the dog. In humans, rare reports have linked transvenous leads to inferior vena cava obstruction. In two such cases, obstructions were caused by fibrous tissue and adhesions involving loops of pacemaker leads within the right atria that were adjacent to the inferior vena cava orifice.3,4 The authors of those reports postulated that fibrosis occurred secondary to trauma to the vessel wall associated with the presence of the lead loops. A similar pathologic process caused tricuspid valve stenosis following pacemaker implantation in a dog.5 In that case, a large loop of redundant lead in contact with the tricuspid valve damaged the valvular endothelium, initiating an inflammatory response with subsequent fibrosis and adhesion of the tricuspid valve leaflets to each other and to the lead. In humans, endothelial injury, fibrosis, calcification and adhesions leading to tricuspid valve stenosis has also been described as a complication of looped transvenous leads.6,7 In addition, multiple pacemaker leads, abandoned leads and large leads relative to vessel diameter have been linked to vascular wall inflammation, fibrosis and thrombosis caused by mechanical stress on the venous wall.8,9 Similar vascular pathology resulting in obstruction to cranial vena cava blood flow has recently been reported secondary to the presence of dual chamber pacemaker leads in two dogs. Both of those cases were successfully treated by balloon angioplasty.10

In the case described here, the suspected cause of the caudal vena cava obstruction included thrombosis, fibrosis, and adhesions. Non-selective and selective caudal vena cavagrams and pressure measurements demonstrated continued obstruction to flow despite withdrawal of the loop of lead from the vessel lumen. Angioplasty of the caudal vena cava disclosed an hourglass appearance at the site of obstruction, consistent with a circumferential fibrous ring or band. These findings suggest that the loop of pacemaker lead damaged the vascular endothelium with subsequent inflammation, thrombosis and fibrosis.

The most frequent major complication associated with transvenous pacemaker implantation is lead dislodgement.11,12 In this case, additional lead was placed to reduce the risk of lead dislodgement. However, lead redundancy allowed a loop to form within the caudal vena cava, resulting in endothelial damage with fibrosis and stenosis of the vessel. This, in turn, led to post sinusoidal portal hypertension, and a modified transudate ascites. Caudal vena cava obstruction also decreased venous return to the heart despite the presence of collateral venous circulation. Decreased venous return and loss of water in the ascitic fluid led to diminished cardiac output and renal blood flow with secondary azotemia. Fortunately, this patient responded favorably to withdrawal of the pacemaker lead loop and angioplasty of the caudal vena cava, and showed complete remission of clinical signs despite a small residual pressure difference between the caudal vena cava and right atrium.