Angiographic classification of patent ductus arteriosus morphology in the dog 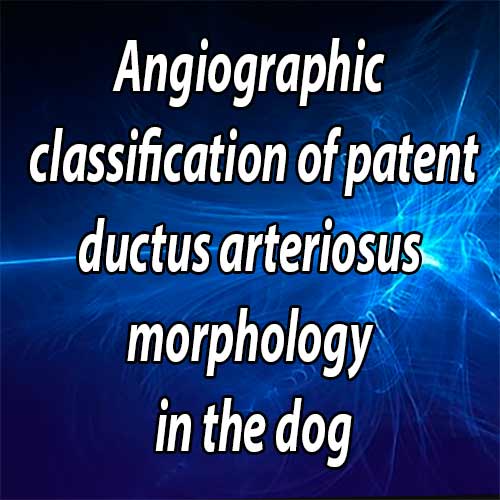 BACKGROUND: PDA is the most common congenital cardiac malformation in the dog. Transarterial ductal occlusion is increasingly performed to close this defect. While accurate assessment of ductal morphology and luminal diameter is important to assure optimal occlusion using catheter-delivered devices, such information is currently limited.

RESULTS: PDA morphology conformed to four general phenotypes (types I, IIA, IIB, and III) which varied according to degree of ductal tapering, and the presence, absence, or location of abrupt ductal narrowing. Minimum internal ductal diameter for all dogs averaged 2.9mm (median, 2.5mm; range, 1.0-9.5mm) and was not correlated to age or body weight. There was no significant difference in minimum internal diameters between types I, IIA or IIB patent ductus arteriosus (PDA), whereas, type III PDA was significantly wider (p=0.024) than other phenotypes. The most frequently-encountered variant (type IIA) was identified in 54.4% of cases (average minimum internal diameter, 2.3mm [median, 2.2mm; range, 1.0-5.5mm]).

CONCLUSIONS: Patent ductus arteriosus angiographic morphology was categorized based upon the degree, presence, or absence of ductal narrowing, and the location of ductal attenuation. When planning PDA repair, this information should assist planning, selection and deployment of transcatheter occluding devices.

Patent ductus arteriosus (PDA) is the most common congenital heart defect in the dog, and more breeds are now affected compared with breed surveys conducted 30 years ago.* 1 Increasingly, transcatheter intravascular techniques offer less invasive alternatives to thoracic surgery for correction of this condition.2—i8 Importantly, these techniques rely upon accurate angiographic characterization of ductal morphology and diameter. This information is required in order to facilitate selection and optimal placement of occluding devices (e.g., the Gianturco vascular occlusion coil, Gianturco—Grifka vascular occlusion device, or Amplatzer vascular occlusion plug).9 Although a detailed anatomical description of angiographic ductal morphology has been published for patent ductus arteriosus (PDA) in humans,10 angiographic descriptions of ductal morphology in the dog with PDA are limited. The purpose of the present study was to describe and characterize the angiographic morphology of patent ductus arteriosus (PDA) in dogs, and to develop a morphological classification scheme to facilitate intravascular ductal occlusion.

Following routine anesthesia, arterial access was obtained either percutaneously, or by surgical cut- down of the femoral artery. Following insertion of a vascular introducer, an angiographic catheter or transeptal sheath was positioned in the descending aorta or directly within the PDA. Angiograms were performed in the right-lateral projection by injection of 0.5—2 mL/kg of radiographic contrast material (Hexabrix,f Angio-Conray,g Omnipaque Renographin,h or Oxilani) via power injector with 300—1050 PSI pressure, or by vigorous hand injection. Angiograms were recorded either digitally, on 110 mm film, on video tape, or by combined techniques. These were carefully reviewed frame by frame off line by the same investigator (MM). Special attention was directed to ductal morphology, and to determine the minimum internal diameterof the PDA. The absolute minimal internal ductal diameter was established by comparing the angiographic width of the ductus at its most narrow diameter, to known angiographic measuring markers that were positioned within the imaging field. Uncertainties were resolved by consensus. An angle was measured that represented the degree of distal ductal taper from its point of aortic origin. This angle was defined by the intersection of two lines that were drawn beginning where the ductus departs from the aorta, and then extended distally along the anterior and posterior ductal borders.

Continuous data was reported as mean ± standard deviation, median, and range. Spearman rank correlation was used to evaluate the relationship between minimum internal ductal diameter, age and body weight. Kruskal—Wallis one-way analysis of variance on ranks was used to compare minimum internal ductal diameters between categories of ductal morphology. A multiple comparison procedure (Dunn’s method) was used to isolate the group or groups that differed from the others. Linear regression was used to identify a statistical relationship between age or body weight and minimal ductal diameter. Statistical analyses were performed using commercial software (SigmaStat 3.1). A p value <0.05 was considered to be statistically significant.

In the right lateral view the angiographic position of the patent ductus arteriosus (PDA) relative to the ventral margin of the descending aorta and the dorsal margin of the main pulmonary artery was noted as follows. The ductus coursed in a cranioventral direction in 214/246 dogs (87%), and in a dorsal to ventral direction (essentially perpendicular) in 32/246 dogs (13%). The ductus tapered substantially (>30%) from the point of the descending aorta towards the main pulmonary artery in 226 of the 246 dogs (92%). This conferred to the ductus an overall conical or funnel shaped appearance. Narrowing was most prominent at the point where the ductus inserted into the pulmonary artery. These changes were observed most clearly at or close to the ventral border of the trachea. In the remaining 8% of the dogs there was very little alteration in the ductal diameter, and its morphology appeared as an unrestricted, tubular configuration.

Although there was considerable minor variation of morphology, the angiographic appearance of each ductus arteriosus could be classified into one of four phenotypes (Fig. 1). Type I PDA was recorded in 12 dogs (5%), type IIA patent ductus arteriosus (PDA) in 134 (54.5%), type IIB PDA in 80 (32.5%), and type III PDA in 20 dogs (8%). These types were distinguished by the following morphological characteristics. A type I PDA gradually tapered from the aorta towards the point of pulmonary insertion, with no abrupt alteration in ductal diameter. The angle formed by the walls of the patent ductus arteriosus (PDA) was typically less than 15 degrees. A type II PDA was characterized by an abrupt and dramatic distal narrowing in ductal diameter of more than 50%. This was subcharacterized into one of two phenotypes based upon morphology of the proximal portion of the PDA. In type IIA patent ductus arteriosus (PDA) the proximal portion of the ductus retained a constant dimension (that is, the walls remained parallel or nearly so) before it abruptly narrowed distally at the point of insertion into the pulmonary artery. In contrast, type IIB PDA morphology displayed a conical ductal shape with the presence of abrupt distal narrowing that occurred just before it inserted into the pulmonary artery (Fig. 2). The angle formed by the type IIB PDA was between 30 and 60 degrees. In contrast, type III PDA morphology was characterized by a tubular appearance without substantial (<20%) attenuation in ductal diameter. 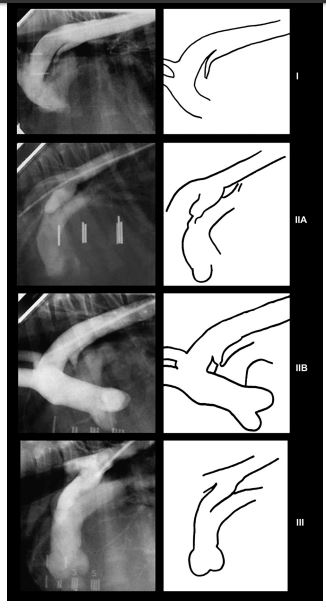 This angle is defined by the intersection of two lines originating where the ductus departs from the aorta, and drawn along the anterior and posterior ductal borders.

There were certain dissimilarities between phenotypes detected in the present study and those reported by Schneider.9 Our series did not identify dogs with ductal constrictions that occurred at both the aortic and pulmonic sites (which would be compatible with Krichenko type D patent ductus arteriosus (PDA)). Moreover, we identified a type III PDA morphology in 8% of our study population. It has been our experience that this morphology is common in the German shepherd breed in the United States. This phenotype was not reported by Schneider whose study population contained a large number of this breed.9 In addition, we identified five percent of our cases which had gradual ductal tapering (type I PDA), whereas this phenotype was not reported in dogs from Germany reported by Schneider.9 These differences probably represent differences in the genetic pools of dogs from different countries.

The morphology and luminal diameter of persistent PDA are critical variables which must be patent ductus arteriosus (PDA) determined prior to interventional occlusion with a catheter-delivered device. Human clinical experience suggests that a strategic approach to ductal occlusion based upon ductal morphology, length to width ratio and minimum internal diameter decreases the frequency of procedure-related morbidities, such as embolization rate, incidence of left pulmonary artery stenosis, incomplete ductal closure, and the need for a second procedure.11e13

Veterinary clinical studies also have suggested that ductal diameter and morphology may influence outcome during transcatheter patent ductus arteriosus (PDA) occlusion.6,14 In fact, considering the vascular occlusion devices that are currently available, types I, IIA and IIB PDA would seem to offer the best morphology for repair by transarterial methods. In contrast, the type III PDA displays lack of distal ductal taper, tends to be large in diameter, and does not provide an area upon which occluding devices can become engaged. For these reasons, it has become our practice to avoid percutaneous ductal closure for dogs with type III patent ductus arteriosus (PDA) morphology. We generally prefer to choose embolization coils with diameters that are at least two times larger than the minimum ductal diameter. When ductual morphology is type IIA, we routinely deploy the entire coil within the ampulla of the ductus itself. Conversely, in patients with type IIB morphology, we generally deploy the initial loop of the first coil into the pulmonary artery, and the remaining coil loops are then extruded into the ductal ampulla. It is also our preference to more commonly consider using a vascular plug in patients with type IIA morphology than in a patient with type IIB morphology. Prospective studies need to be performed in order to assess whether these clinical guidelines confer actual benefit.

The boxes display the 25th and 75th percentiles while the error bars delineate the 10th and 90th percentiles. The line within the box represents the median diameter of the group. All outliers are displayed as individual data points. The minimum internal diameter of Type III patent ductus arteriosus (PDA) was significantly greater (p = 0.012) than that of all other ductal phenotypes.

The present study contains several limitations. We made all morphologic assessments using the lateral angiogram. Reliance on a single angiographic position may provide incomplete appreciation of certain angiographic features. Moreover, ductal dimensions were measured from different image storage modalities, and this might have influenced slightly some of the measurements. Furthermore, three-dimensional morphology is incompletely described by evaluating a single projection of a twodimensional imaging modality. Biplane angiography, high speed computed axial tomography or magnetic resonance imaging would provide better anatomic detail but were not available during this study. Furthermore, the present study characterized ductal morphology into one of four phenotypes. A departure from the more detailed Krichenko system. A more complex classification scheme might be constructed in order to address the subtle morphologic variations within the types of patent ductus arteriosus (PDA). However, the clinical utility of such a complex scheme is unclear.

The present study evaluated angiographic features of canine PDA and organized these morphologic findings into a simple classification scheme. This may help investigators optimally select and deploy transcatheter occlusion devices as well as compare outcomes with different forms of patent ductus arteriosus (PDA), or using different techniques. Additionally, this classification scheme may help to evaluate the relative efficacy of specific occlusion devices as newer technologies are developed.