Amlodipine: One of the main anti-hypertensive drugs in veterinary therapeutics 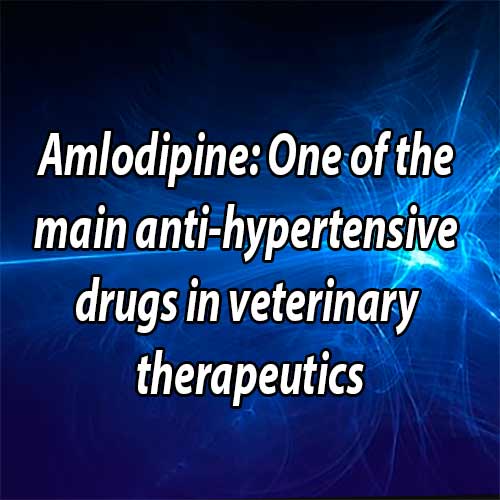 Amlodipine is a dihydropyridine compound and belongs to the pharmacological family of calcium channel blockers. It is one of the maintreatments of systemic arterial hypertension in cats and its validity has been confirmed in several reports. Its beneficial effect on the peripheral and coronary vascular bed is due to immediate vasodilation and to a delayed anti-hypertrophic action. The aim of the present review is to highlight the clinically-relevant characteristics of amlodipine, especially regarding its mechanism of action, and to present the main clinical reports supporting its interest in veterinary cardiology.

Amlodipine became very popular in veterinary cardiology one decade ago.1 It is one of the main treatments of systemic arterial hypertension in cats and its validity has been confirmed in several reports.2-4 Chemically, amlodipine is a dihydropyridine compound and belongs to the pharmacological family of calcium channel blockers. These blockers, also known as calcium antagonists, elicit a decrease in calcium entry into the cell and lead to an inhibition of: (i) sinoatrial pacemaker activity and atrioventricular conduction, (ii) cardiac ino- tropy and (iii) vascular contraction. The dihydro- pyridines are more active on vascular smooth muscle calcium channels than on cardiomyocytes or sinoatrial cells.5,6 They are sometimes considered as "vasoselective’’ in comparison with other calcium channel blockers, i.e., phenylalkylamines (e.g., verapamil) and benzothiazepines (e.g., diltiazem). The aim of the present review is to highlight the clinically-relevant characteristics of amlodipine, especially regarding its mechanism of action, and to present the main clinical reports supporting its interest in veterinary cardiology.

Dihydropyridines can be divided into several generations beginning with nifedipine and nicardipine.

These first generation compounds were already able to elicit profound arteriolar vasodilation but their practical use in humans was difficult because of the short elimination half time, i.e., 3—4h for nifedipine.7,8 This difficulty was circumvented by the development of slow-release preparations and the long-acting compounds of the second generation, e.g., amlodipine with an elimination half time of 40—50 h in humans.9 This molecule is also the main dihydropyridine used in veterinary medicine (Fig. 1). Another generation is currently being developed to prevent human hypertension and will probably be used in veterinary medicine in the future.7

Amlodipine is generally used as the besylate salt, which is a white crystalline powder. This salt is a component of several human tablets, e.g., Nor- vasc® (in many countries such as USA and Canada), Amlor® (in France and Belgium), Amlodin® (in Japan) or Amlogard® (in India). The amount of amlodipine in these different types of tablets varies between 2.5 and 10 mg.

The main pharmacokinetic parameters of amlodipine in dogs, according to the results of Stopher et al.10 are shown in Table 1. The plasma concentration slowly increases throughout repeated administrations, until a plateau is attained after one or two weeks. Amlodipine is metabolized by several phase I reactions such as hydrolysis of the ethylic substitute and degradation or oxidation of the amino side chain.10 None of the main hepatic metabolites showed any significant pharmacological activity. Liver diseases might therefore alter amlodipine degradation, suggesting a need for particular caution in animals suffering from such diseases. The overall excretion of the parent compound and metabolites of amlodipine is equally distributed between the urine and feces.

To our knowledge, no specific pharmacokinetic data is available for amlodipine in cats. This is unfortunate in view of the fact that the current principal use of this compound is in these animals.

As illustrated in Fig. 2, calcium entry into the vascular smooth muscle cells mediates numerous effects that lead to vascular contraction.11 Calcium entry into the heart cells not only mediates cardiomyocyte contraction but also positive dromotropy and chronotropy as depolarization of the nodal tissue during diastole is dependent on this process. Furthermore, calcium entry into the depolarizing and/ or contracting cells is mainly due to voltage-gated calcium channels, which can be divided into T, N and L types. Amlodipine, like the other major calcium channel blockers, selectively inhibits the opening of the L type.12 The main effects of amlodipine are vascular, i.e., profound vasodilation in comparison with only slight cardiac effects (Fig. 3).13

The magnitude of dihydropyridine-induced vasodilation depends on the increase in constriction tone at rest, as in coronary or skeletal muscle vessels. Accordingly, the magnitude of the decrease in mean arterial pressure is related to the increase in pre-treatment blood pressure and venodilation is very mild at therapeutic concentrations.14 Furthermore, the effects of calcium channel inhibition are not only immediate vasodilation but may also be delayed inhibition of vascular hypertrophy and remodeling in rats.15 These anti-hypertrophic properties of calcium channel blockers are obviously relevant in the context of systemic hypertension, since this disease alters cardiac morphology in cats.16 Finally, amlodipine is an original calcium channel blocker as it brings about the activation of nitric oxide synthase enhancing vasodilation in dogs.17 This further confirms the therapeutic interest of amlodipine in systemic hypertension.

Dihydropyridines also exert indirect effects on the myocardium in dogs by increasing coronary flow and decreasing afterload in dogs.13 These phenomena result in favorable myocardial anti-ischemic effects and enhance a slight inhibition of calcium ischemic overload, e.g., in rats.18 This inhibition is directly due to a decrease in ischemic calcium entry into the cardiomyocytes. It should be emphasized that although acute ischemic myocardial diseases are very rare in veterinary cardiology, short subclinical ischemic episodes may be involved in myocardial remodeling and accelerate the evolution of compensated hypertrophic cardiopathy to cardiac failure.19 The potential anti-ischemic properties of amlodipine should therefore be considered as interesting. 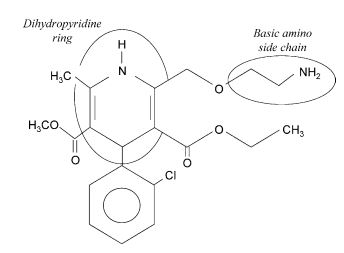 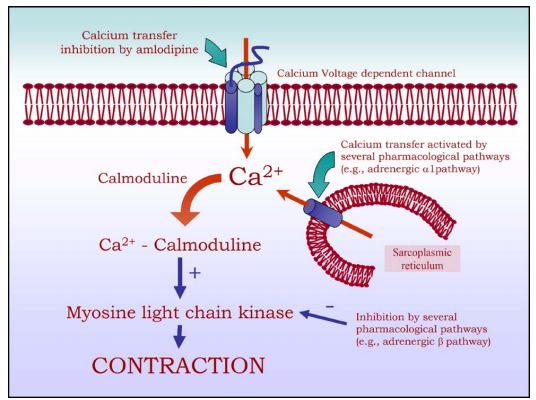 We have already emphasized that amlodipine elicits arteriolar vasodilation and afterload reduction, suggesting its possible use in heart failure and systemic hypertension. Its main interest is, however, limited to the treatment of systemic hypertension although the cardiac depressive effects are slight. Since such a disease has mainly been described in cats rather than dogs, most of the clinical reports have been devoted to this species.

Table 2 Methods and main results of some published reports about amlodipine efficacy in feline hypertension (not exhaustive)2e4,20 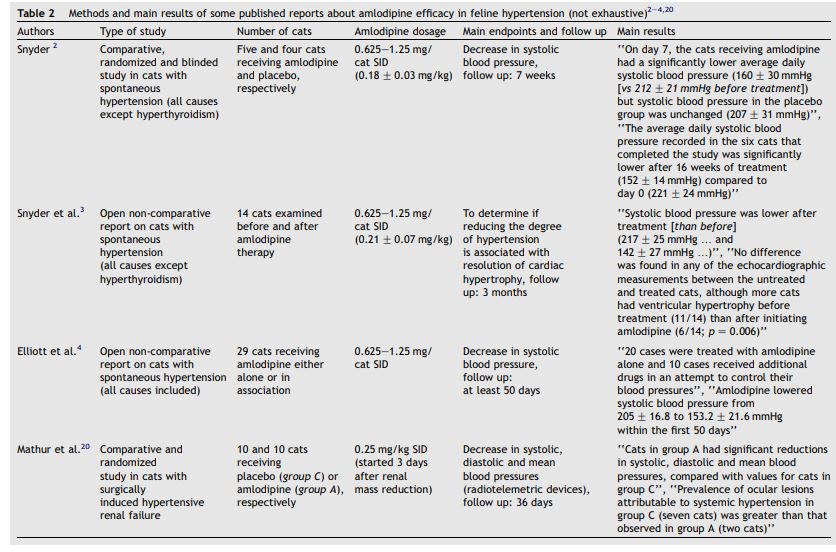 Table 2 shows the methodology and conclusions of some of the clinical reports on which the effectiveness of amlodipine as an anti-hypertensive in cats is based.2-4,20 This property was mainly observed in essential hypertension and secondary to chronic renal failure. One of the reports shown in Table 2 also included cats with hypertension and concomitant hyperthyroidism (seven out of 30 cats).4 Mathur et al.20 further demonstrated in surgically induced hypertensive renal failure that secondary lesions attributed to systemic hypertension, e.g., retinopathy, were prevented by the decrease in blood pressure induced by amlodipine. This compound seems therefore to be one of the best anti-hypertensive drugs in cats since angiotensin converting enzyme inhibitors and b-blockers led to disappointing results in first line treatments.4,21 However, no prospective, blinded and comparative trial involving amlodipine and these other drugs has been performed to confirm this clinical observation. Finally and as shown in Table 2, the use of amlodipine has been proposed by Snyder et al.3 in systemic hypertension associated with myocardial hypertrophy. However, the effect of amlodipine in such a context has not been prospectively and blindly compared to that of other treatments (e.g., diltiazem or b-blockers).

In comparison with feline medicine, canine cardiology has not been focussed on systemic hypertension as this is seldom observed. Many experimental investigations have demonstrated that dihydropyridines are able to decrease arterial pressure in dogs22,23 but no large prospective clinical trial has been carried out to determine amlodipine efficacy in canine hypertension. Some veterinary cardiologists seem to prefer angiotensin converting enzyme inhibitors or b-blockers on the basis that the decrease in blood pressure induced by amlodipine in dogs is disappointing compared to the effects observed in cats.

Several clinical reports on hypertension in cats conclude that amlodipine at the usual dosages (0.625-1.25 mg/cat, SID) is very well tolerated and that excessive pharmacological activity, e.g., an excessive decrease in mean arterial pressure, is very rare.2-4,20 Elliott et al.,4 however, reported one case of hypotension in one cat treated with both amlodipine (0.17 mg/kg SID) and propranolol (0.35 mg/kg TID) out of 30 cats treated with amlo- dipine alone or in combination. This suggests that blood pressure should be particularly monitored in the few animals receiving several anti-hypertensive drugs. Special caution would, in theory, be also required in patients with hepatic disease as amlo- dipine is highly metabolized by the liver.

In conclusion, and as shown in Table 3, amlodipine belongs to the dihydropyridine family of calcium channel blockers. It is a vasoselective drug with slight cardiac effects. Its beneficial effect on the peripheral and coronary vascular bed is due to immediate vasodilation and to a delayed antihypertrophic action. Amlodipine can thus be considered the "gold standard’’ for the treatment of systemic hypertension in cats.